Everyone can look back on a past event and wish it had turned out differently. Most of the ones that really tug at the emotional heartstrings are those in which we behaved poorly. (It seems for me that the blue and yellow lockers of my high school’s hallways frame nearly all of these.) There is always a moment when we can be more compassionate to others and for whatever reason choose not to be.

When I was a kid, Dark Horse Comics was one of the “other companies”. You had the big two and then the “other ones”. I knew them because they published Star Wars comics, and then later landed such great books as Sin City and Hellboy. (Happy 20 years horn-head) But one book has continued despite the oft-times unimaginable whims of the comic industry and that is Dark Horse Presents. It’s a showcase book, allowing established creators to put out one-shot ideas as well as showcasing new talent, and one that Dark Horse has been publishing since its inception.

Cue Chad Lambert, who published his comic short in Dark Horse Presents #31- #33. Kill Me introduces us to Jack, a man completely unhappy with his life who returns to his last happy memory to end it. He is literally haunted by his past when he falls asleep in an amusement park bathroom and is woken up by…himself. Jack, dear readers, is time traveling. And we all know the slippery, timey-whimey slope that becomes. In traveling to the past and leaving it unchanged, he creates an unending loop of selves that continue to return until they stack up like cordwood. Jack decides that the only way he can changed the past is by cleaning it up, and that means wiping out all his formers selves, wandering about with partially loaded pistols.

This is a Twilight Zone episode if ever there was one. Lambert takes an emotional jab at everyone who has thought about those poor behaviors and regretted them. He has also introduced the time travel element, a Serling-esque opportunity to go back and fix the mistake. It is once we see Jack literally killing himself off that we understand how important this one event has become in his life.

Christine Larsen (Kung Fu Panda, Teddy Scares) is the artist on this, and I found it to be somehow nostalgic without being able to specifically pinpoint why. It kind of reminds me of some Mad Magazine illustrations, and also of Jeff Smith’s Bone series at other times. I also loved her use of color, using greens and blues when in Jack’s past and more red and orange in the present. Those colors changes helped imbue a sense of urgency within the present and to reinforce the nostalgia and…not calmness, but that easy-going, relaxed feel that teenagers have when they’re on the cusp of adulthood. “Don’t worry man, it’ll be fine…”

If you’re going to your LCS this Wednesday (or any day, let’s be honest, do we really need to wait till NCBD to go to the shop?) then be sure to pick up the last three Dark Horse presents, featuring Chad Lambert’s Kill Me. It’s easily worth the cost of the books, plus, because they’re anthology books, you get a couple of other great stories along with it. Kill Me offers a look at the past through the ground lens of the future, and offers a chance at redemption that few get.

Click Image to Purchase DHP #31-33 From the Dark Horse Store: 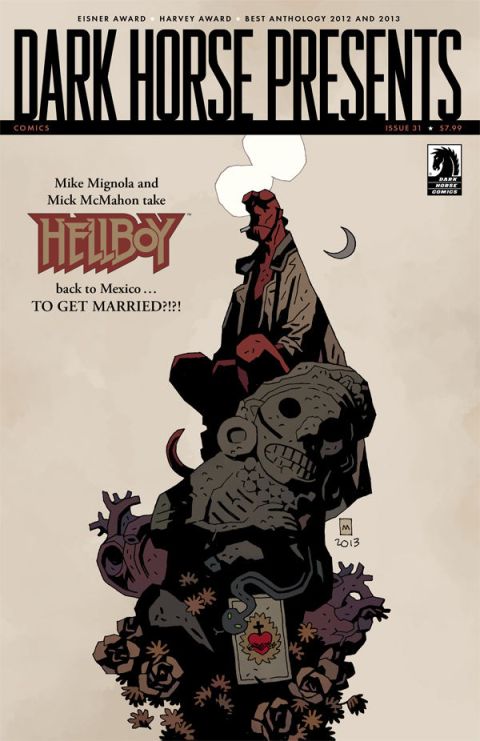