Jonathan Ross (Turf, America’s Got Powers) is back with a (re)-Vengeance! Revenge #2 drops this week from Image, and if you thought the first was messed up, wait till you read the second.

Griffin Franks is a has been. A B-Film star (The Revenger for those of you who missed #1) on his way out, betrayed by a young and beautiful wife and the driver he thought he trusted. They took him to Mexico for a facelift and literally lifted his face, right off of his head. Griffin’s face was reattached to the young driver, and Griffin himself was left in a vat of fluid, being kept alive with his face ripped off, without painkillers, indefinitely. Candy is a femme fatale of the very worst kind, double and triple crossing everyone in her life while couching it in a film of deserved retribution. During this time Griffin is in a fever dream without the fever, an ongoing drug-induced hallucination, which only fuels his impending psychotic break.

This is a straight grindhouse film, paneled, lettered, and colored. Ross has taken a revenge story and gored it up, made it realistic to the maximum, and doesn’t let the “camera” pan away for the gruesome parts. The reveals are full-paged and slick with blood. These are all involved in your typical grindhouse film, and because of that it’s a unique comic experience. It’s not that this kind of this hasn’t been done before, but I have never seen it from a major publisher like Image. Is the door opening to let the Revenge-type comics into the mainstream?

The art has more of a regular comic feel in style, though the subject matter (of course highly motivated by script and writer) is of the highest (or lowest?) grindhouse quality. Ian Churchill (The Ravagers, Elephant Men) showcases his ability to deftly mix the macabre and mundane, the beautiful and the monstrous. He has blended images together to make Griffin’s break with reality seem like the only sane thing in the book, and that works great for the story.

There is hope for the hero in this case. He does have one daughter, Alice, who we met in the first issue, who is worried about him. There is a possibility of some redemptive qualities coming down the pike. Griffin has also befriended the horned dwarf (for those of you who haven’t read issue one, the horned dwarf is, believe it or not, less strange than most of issue two.) who was the doctor’s assistant.

The issue ends with a slightly dogged Griffin, somewhat changed but still angry as hell, and ready to jump on the warpath. He knows his purpose, and now has the stone-cold will to do what he feels must be done. There will be vengeance in issue three, it will be bloody and fantastic and bloody fantastic. If you’re a fan of grindhouse.

Jonathan Ross is the perfect writer for this series because he can offer a different view of an old genre, instilling in it a gristly future. Churchill’s art is a good compliment and well suited to the story.

I was going to end this with some pithy quote about revenge, and then to turn it around so as to look clever, but none of the square pegs quite fit into this round hole. And the reason is just that. Revenge is a book unlike any other on the comics market. It moves fast and kills quickly, and makes you wish there was popcorn. 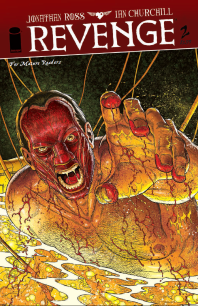