To say Marvel is on a roll would be the understatement of the century; they are not only on a roll, but on a roll that spans film, television and comic books. No other Marvel title ties all of those worlds together better than the Secret Avengers under the direction of this new creative team. Ales Kot, Michael Walsh and Matthew Wilson have melded the huge action, extraordinary set pieces, razor sharp wit and humor of the blockbuster films with the intrigue, tech heavy plots and team dynamic of the Agents of S.H.I.E.L.D. television series to come up with possibly the best book since this whole Marvel Now reconfiguration started. That is some mighty lofty praise when you stop and really think about the many great books that have come out of Marvel Now; there is Duggan and Posehn’s Deadpool, Hickman’s Avengers titles, Bendis’ X-Men books and much more recently Edmonson and Gerads’ Punisher as well as his Black Widow book with Phil Noto and that is by no means anywhere close to a complete list, so as you can see there has been no shortage of amazing Marvel books but Secret Avengers is just that darn good. This is the kind of book that I would recommend to people who are not necessarily regular comic book readers; it has mass appeal to put it more concisely. Much in the same way that you do not have to read Marvel comics to enjoy a Marvel Studios film, I believe that same audience would greatly enjoy this book and then possibly they would become more interested in what other comic books are like. So, in this book we have a wonderful gateway, not just into the Marvel Universe but, to comic books in general. There have been books like this in the past, The Walking Dead comes to mind, but sadly they are certainly few and far between. It doesn’t hurt that Marvel has such a strong presence in film and a growing presence in television with the Netflix shows on the horizon but this book could very well be the missing piece that ties everything together and brings the audience back to where all these fantastic stories and characters were born, the comic book page.

The first issue of Secret Avengers features a somewhat scaled down team, the core unit of which is Fury, Coulson, Black Widow, Spider-Woman, M.O.D.O.K. (yes the one and only mechanized organism designed only for killing) and the rather unexpected addition of Hawkeye, unexpected for him, you will see what I mean when you read the book, all led by Maria Hill. Kot does an absolutely flawless job of juggling these characters, especially when you see that they are pretty widely dispersed on their respective missions. Fury and Coulson find themselves in space facing a rampaging being called The Fury which for all intents and purposes seems hell-bent on eliminating the two newly paired agents. The dynamic that Kot creates between Fury and Coulson is one of the many fun elements of this book. The two share a kind of Riggs and Murtaugh-like strained friendship that transforms organically into camaraderie in the course of working together in such a capacity. Meanwhile, Natasha and Jessica are enjoying some hard earned pampering at a Russian spa. The two lethal ladies are treating themselves to some gelato and target practice when they get a distress call from their fearless leader, Maria Hill. It seems that an uninvited guest has breached security at S.H.I.E.L.D. headquarters and Hill and M.O.D.O.K. are locked in the “Mad Science Lab” while the intruder has killed his way through the building on his way to make them his next victims. At this point a cadre of A.I.M. soldiers show up to rather unceremoniously bring the ladies’ spa day to a rude and potentially permanent end. They are now also joined by a birthday suit-clad Hawkeye who has just been very inappropriately treated at the hands of some A.I.M. operatives. The action is relentless, the dialog is sharp and the humor is smart. Kot’s short run joining Nick Spencer at the very end of the previous Secret Avengers run was good but I was not prepared for just how amazingly this new series was going to begin. There is not a single misstep in the execution of this book; from concept to completion it is a singular work of comic book genius. The collaborative result of this creative team is only beginning to blossom as the groundwork for a phenomenal run has been set.

Walsh brings a stylized approach to anatomy and character design that melds realistic and cartoony elements to an extremely effective result. His energetic line work lends a kinetic sense to the action that fits nicely with the fast pace of Kot’s narrative. Walsh has an eye for design that translates into some very dynamic page designs and inventive use of panels. Wilson’s palette is vibrant yet strangely subdued consisting of slightly muted tones that work perfectly with Walsh’s imagery and the overall atmosphere of the book. This is truly one of the best looking books on the racks right now. I would be remiss if I didn’t mention the sensational Tradd Moore cover; the design harkens back to the psychedelic covers of the original Steranko Nick Fury series, nuff said.

Marvel seems to be unstoppable lately; this week alone they added two incredible new number ones to their growing list, Captain Marvel and Secret Avengers. This book is that rare gem that can be used to open the world of comic books to the uninitiated. It is not full of genre specific jargon that could scare off some potential readers yet it maintains all the tried and true elements that make comic books so much fun. I recommend this book to anyone who likes to have fun while they are reading and I hope that includes anyone reading this review. So don’t miss out on something extremely special, the secret is out, Secret Avengers is awesome! (5/5) 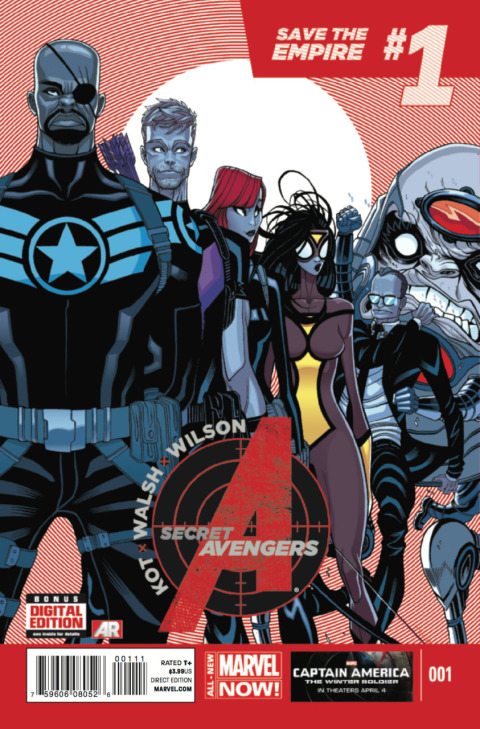