Judge Dredd has been a staple character in the comic book industry since his inception by John Wagner and Carlos Ezquerra, in 1977.  He has been through so many incarnations and seen so many different takes that a new on-going series would seem to be like trying to get artistic inspiration from a used coloring book.  It’s not going to be easy.

Thankfully, writers Ulises Farinas and Erick Freitas (Amazing Forest), in which Farinas has previously stepped into the world of Judge Dredd with Judge Dredd: Mega-City Two, have not taken my pessimistic view of the futility of trying to have a fresh take on a less than fresh character. 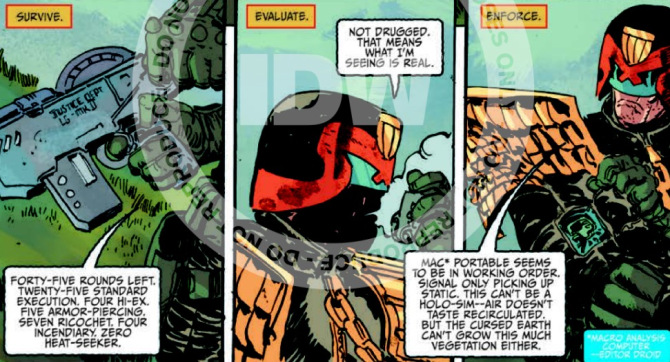 In this first issue they have taken Dredd and put him in a fish out of water situation that gives life to the no non-sense executioner Judge from Mega-City One.  From the jump, we find Dredd waking up to find himself not in the bustling chaos of Mega-City One, but in a green field with a fresh breeze, clean air, and serine silence.  Dredd does not take time to appreciate this and smell the roses.

Right away, Dredd’s training kicks in.  His thoughts automatically go to the robotic mantra, “Survive. Evaluate, Enforce.”  These few panels were a great way to let the reader know what Judge Dredd is all about without going into it too much. 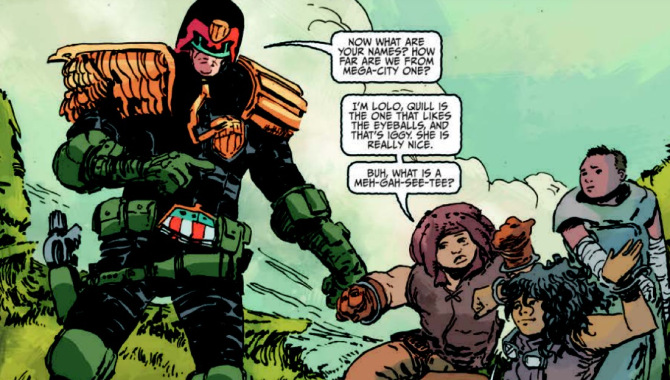 Dredd finds he cannot get in contact with Control, so he decides to investigate his surroundings.  He soon comes across three kids that are beating up a man for “kicking puppies”. Dredd is now in his element, enforcing the law.  He does hand out his usual brutal judgment, but not necessarily in the way you would think (new place, same old Dredd).

He ends up arresting the three juvenile delinquents, and taking them to what should be Mega-City One.  What he finds is something completely different.  The Mega-Block is there (overtaken by vegetation), but no Mega-City.

This first issue works really well on many levels.  We get the Judge Dredd we want.  We get Judge Dredd in a situation he isn’t used to.  We get a story that we haven’t gotten before.

Farinas and Freitas do a marvelous job at staying true to the character of Judge Dredd, and creating an interesting landscape for him to live in.  It is very much a Dean Martin/Jerry Lewis dynamic.  We have the straight man played by Dredd, and we have the charismatic off the wall character, in this case, played by the new over vegetated, unfamiliar environment of what should be Mega-City One.

The story is what you want in a Dredd book, but can only be capped off by suitable artwork.  We get that it spades with Dan McDaid’s (Dawn of the Planet of the Apes) art on this issue.  The challenge is having the familiarity, and the hardness of Judge Dredd work alongside the open landscapes, and new characters of the story.  He captures the hard edged roughness of Dredd, and does a fantastic job of letting the environment become its own.  From the grassy lands of “The Grass” to the crowd scenes toward the end of the issue, it all melds together perfectly.

Colorists Ryan Hill (Stumptown) is part of the reason this feels so different.  The colors make the classic coarseness of typical Dredd book pop in a way it usually wouldn’t; the Dredd look with a subtle lighter difference.

Overall this is a breath of fresh air for our favorite Mega-City Judge.  The story is interesting and new, and the art and colors bring to life the new world we are thrown into.

Judge Dredd #1 hits all of the right spots with this first issue.  It takes an oldie but a goodie character like Judge Dredd, and steps into a bright new world, that is still covered in the old fashioned bloody mess goodness of classic Judge Dredd.