Something is rotten in Britannia.  The Druids hold sway over the peasants even as Roman legionnaires enslave and kill them.  Nero sits on the throne, his vices ruling over him as he rules over Rome.

Thus begins Valiant’s Britannia #1, a globe-trotting epic that spans the world of 60 a.d.

60 a.d.  Peter Milligan (Hellblazer) tells the story of Antonius Axia, a centurion in the first Italian Legion.  He saves a Vestal virgin from being sacrificed to Orkus (“Lord of the Cave” as if you didn’t know) and in return he is awarded horrible nightmares of the creature in the cave. 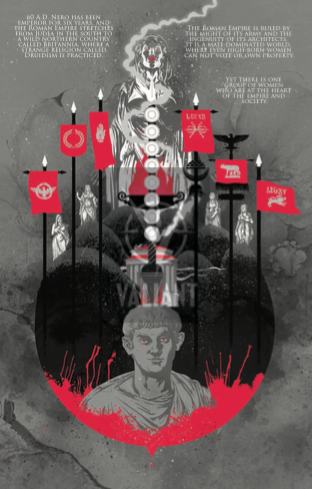 Jump forward six years and Axia has become the “Detectioner”, a man for hire, basically the P.I. of the ancient world.  In Rome of the first century there is all manner of debauchery going on, so much that he’s made quite the living for himself.  The Vestal Virgins healed him after the events in the first part of the story, and found a family to raise the son that he “wasn’t prepared” to raise on his own.  Now they want to send him to Britannia to face a mysterious something that is killing of Nero’s soldiers.

Milligan writes a fast-paced story and still leaves time for us to get to know Axia, to see what his motivations are.  He wants to keep his son safe and separate from him, at the same time he feels indebted to the Virgins.  Nero is depicted as an absolute despot, from the “training” of women to the killing of slaves.  He is the worst that Rome has to offer.

The art comes from three different people.  Raul Allen and Patricia Martin start the story with a fantastic three pages of full-page art in grey scale while Dave Sharpe’s lettering gives us some back story to the opening part of the book.  Then Juan José Ryp (Lady Death) comes in with precise line work and the ever-amazing Jordie Bellaire adds her soft tones, giving the book a realistic look that is a nice contrast to the grey scale at the beginning.  The final image of the book is worth the price of admission alone, though I won’t spoil it here.

Britannia #1 is a great first issue to come out of Valiant, another in the ever-growing pile of popular books that the company has used to revitalize the industry.  Valiant has become a major contender in the market, and with Peter Milligan at the helm, Britannia is sure to be a contender for the consumer’s dollar.