The 50th anniversary celebrations of Star Trek continue with Star Trek Waypoint #1 from IDW Publishing. Featuring stories and art from a crew of the best comic book talent, each issue of this brand new anthology series will feature two adventures from the many eras of Star Trek that will boldly reflect on the past and the future.

I have to admit, I love the concept of this new Star Trek comic series. The idea of a title that can revisit, expand upon, or jump forward to any conceivable point in Star Trek’s illustrious 50 year legacy is inspired. What’s all the more pleasing about this debut issue is how well it showcases the series’ potential to tell stories that embody the ethos of Star Trek so beautifully, and in such a completely new and inventive way.

The first story is a Next Generation adventure were Starfleet has sent Captain Geordi La Forge and Data to investigate an indecipherable transmission coming from an unknown vessel that has suddenly appeared in deep space. Puzzles is a wonderful tale by writer Donny Cates, set in a time frame that’s both easily accessible to newcomers and offers an insightful glimpse into the future for long term STTNG fans, it reunites us with Geordi and his good friend Data as they attempt to solve the enigma of the bizarre cube-shaped vessel. I like the way that Data is now very much an integral part of La Forges crew, it brings a whole new aspect to running a starship, and feels like a natural progression for the character. It’s a joy to see these two fan favorites at this point in their lives, the art by Mack Chatter, with colors by Jason Lewis and Dee Cunniffe, really makes Geordi and Data’s bond of friendship come alive on the page, Data’s interaction with the unknown ships mainframe is stylishly done, the sequences in space are dynamic and exciting, and the coda to this heart-warming tale is also extremely moving. 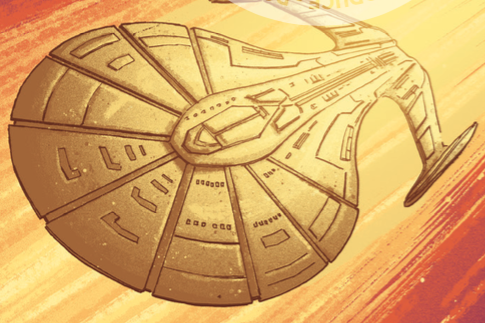 Daylily, the second story, is a Star Trek Original Series tale by Sandra Lanz, which focuses on Lieutenant Uhura. Following a glitch with the transporter, Uhura is separated from the rest of the landing party on an unexplored planet. Uhura must shelter and wait for a storm to pass before the Enterprise can beam her up, but the sudden arrival of a strange alien creature is sure to make her stay on this world an eventful one. The story and art by Sandra Lanz gives this interesting little adventure a cosy, almost serene atmosphere, despite the dusty rain swept setting. The way Uhura and the creature manage to communicate is beautifully staged, turning what could have otherwise been a run-of-the-mill sci-fi cliche, into something very special and memorable.

Star Trek Waypoint #1 gets this new anthology series of to a great start. The two stories in this issue take their specific viewpoints and characters in entirely new directions. Both are essentially great character driven stories, the adventure with Geordi and Data is somewhat bigger on spectacle than maybe the Uhura tale is, but each is quintessentially everything that is great and good about Star Trek. The potential here is vast, with themes and characters spanning their respective eras, Star Trek Waypoint is another worthy addition from IDW Publishing to the Star Trek mythos, and I can’t wait to see what tales future issues will bring. 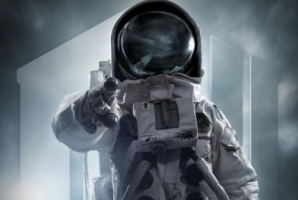