Summary: An instructional series on how to pick up women for 30-Year-Olds. The ins and outs on how to become better a person and finally get with the girl of your dreams. At least, that’s what this series is supposed to be, but how Rikako goes about it is really, rather interesting.

Review: Based on a novel series which acts as an instructional series for men in their 30s on how to become better groomed, and overall finally achieve being with the girl they’ve been vying after. Now, I actually didn’t know any of that during my entire course of reading this.

Truth be told, I was looking for something ecchi to read and I came across this. At such a short number of chapters I figured I would give it a shot but instead what I got was a little bit of ecchi here and there (well, until the end that is) and tons of advice on what I can do to get a girl. The most fascinating thing about this story to me was that none of the advice is outlandish or absurd. In fact, pretty much all of it is sound and truthful.

Brush your teeth, tell her your grateful for all her hard work, wear some slightly nicer clothes that fit you but also don’t make you seem trashy, shower often and comb your hair. Like seriously, the manga is actually filled with pretty solid advice that I’ve even discovered actually works – and most of it is tied to the age old secret that girls like it when you treat them and yourself like a real human being. 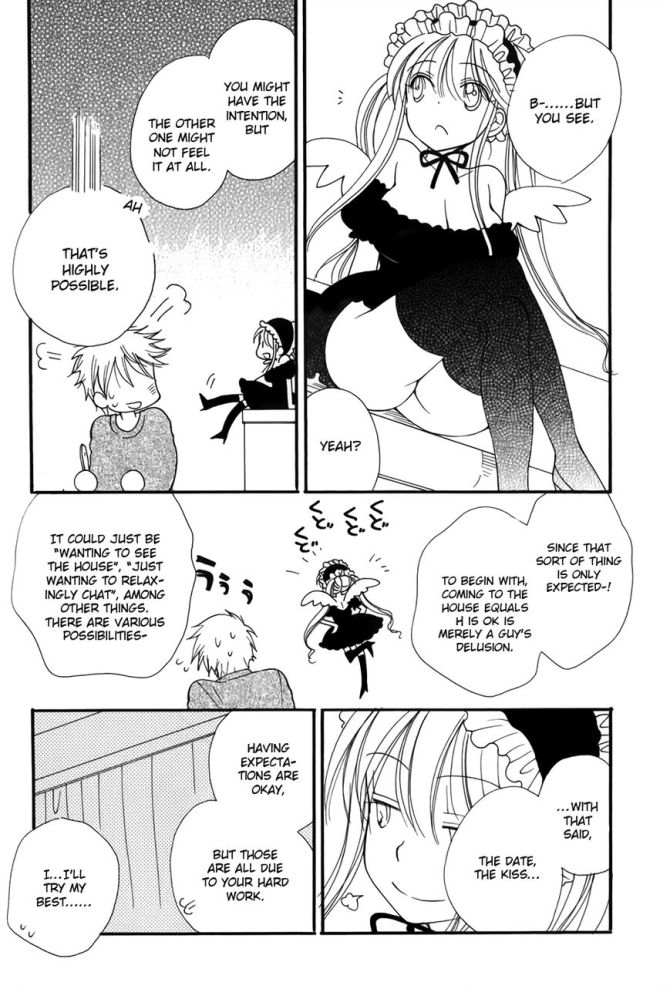 It’s not bad in that respect. I also enjoyed how they administered said advice, through a little fairy lolita girl with a spunky attitude named Cupid. She pretty much appears out of nowhere as the manifestation of a charm Kenta’s mother sends to him, but from her appearance on out the adventure is fun as Cupid tries to get Kenta laid since he’s a 30-year-old virgin.

It’s funny though that the manga centers around such topics however when my biggest beef with this story is actually that Cupid is trying to get Kenta laid. For the first 3 chapters it doesn’t come across like that and leans more towards the more innocent story that Cupid is just trying to help Kenta become a more confident person. Often instilling him advice not just on matters of personal hygiene and conversational topics, but also going as far as to tell him basically “look, she is coming over to your house but don’t expect sex from her. Some girls aren’t after that and sometimes just want to hang out.”

But a page or two later after Cupid tells him this the story quickly and abruptly diverges into Cupid showing Kenta all of her private areas so that he is “used” to a girls sensitive spots, and then after that of course the story ends with Kenta losing his virginity because of course this particular girl IS all about having sex after just a few dates.

The ending is all sorts of a big mess when 75% of the manga doesn’t seem to be going in that direction. The other big issue I had with the 30- sai no Hoken Taiiku is, again funny enough, the ecchi portions of the story. Now, hear me out on this. Most ecchi that exist within their stories at least have some reason to exist. Often they’re not subject to good reason, but a reason none-the-less. Either a gust of wind brushes her skirt up, or the main male character falls on top of the main female character and gropes her. Again, reasons.

In this story though, none of that happens to cause the ecchi scenes to exist. Instead often times when Kenta is talking to his future girl – I honestly forget her name – she exists within a panel standing as still as piece of wood and her skirt has swooshed up on all on its own to show her panties. No gust of wind, nothing, Rikako simply drew her with a hiked up skirt.

At least the final two chapters had a reason for their blatant nudity, if albeit terrible reasons. Also the art is very simple and childish. There’s really no detail to anything, and characters exist in almost caricature like appearances throughout the entire run. I mostly loved when Rikako was drawing Cupid, almost everyone else looked too simple for their own good.

If 30-sai no Hoken Taiiku had focused solely on just giving good advice to men who desperately need it instead of pandering to those who’d prefer to read something ecchi and ending with sex then I actually think I would’ve liked this series more. The advice really is the best part about this tale, everything else comes secondary and unfortunately none of it lifts 30-sai up to what it had the potential to be.