The finale of the Conquerors arc unfolds in Transformers #49, and everything is set to kick off big time! All the different factions have been caught up in the conflict, schemes, and political power struggles.

Now one Autobot decides to take the most drastic action of all as the events on Earth and Cybertron reach a major turning point, and it all collides here in IDW’s Transformers #49 in a spectacular issue that changes everything! 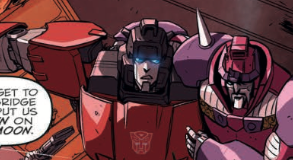 Over the course of the Conquerors arc we have seen Optimus Prime dealing with his new appointment as a kind of space messiah, but the divisions between Autobots and Decepticons have grown ever wider, Soundwave established his commune in orbit around Jupiter, and Galvatron made plans on Earth. Now with the situation escalating on Cybertron, the Autobots trapped on Ark 7 are left battling for survival, and Blackrockís schemes were also revealed at the  Earth Defence Command HQ after Sky Lynx, Jazz Jetfire, and Kup escaped (with a little help from Buster the dog and D.O.C the drone) just as Galvatron finally made his move!

It all comes down to this, with the culmination of events on Cybertron and Earth hurtling together in Tranformers #49, written by John Barber, with art by Sarah Pitre-Durdcher, and colors by Josh Perez & Josh Burcham, this is the one that sets the stage for the epic 50th issue of IDW’s Transformers comic book series!

The issue opens right in the thick of the action following Transformer #48’s cliff-hanger ending when Galvatron stepped in to seize his prize. Events unfold quickly on several fronts, with Galvatron’s standoff against Sky Lynx, Jazz, and Jetfire, in the EDC HQ, Arcee and the Autobots falling under attack on the Ark 7, and Camien hero Windblade leading the efforts to shut down the Spacebridge as numerous plot strands converge.

John Barber’s taut script keeps each branch of the storyline moving, towards the magnificent final moments. Everything is balanced a knifes edge, so much so that even Soundwave looses his cool when he realizes he has been deceived, not that Cosmos is surprised at this turn of events. Although control of the Spacebridge is vital to the outcome, along the way we learn Tracks is still alive, there’s a fun scene with Starscream, and Aileron is reunited with Sterling. But not everyone is going to make it through this issue unscathedÖ The key turning points come when least expected, especially when Skywarp gets tired of everyone telling him what to do, the female combiner Victorion gets a new friend, and there’s the inevitable showdown for Optimus Prime and Galvatron. Transformers #49 is a blockbusting issue from John Barber, with its mix of high-end politics, great characterization and big action set-pieces, the sheer scope and scale of it all is breathtaking, and it paves the way for one of the biggest changes of all for the Transformers universe. 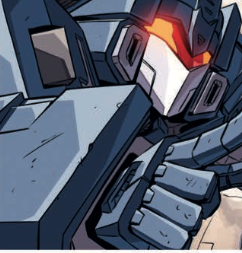 Sarah Pitre-Durdcherë’s artwork for Transformers #49 assuredly captures every thrill-packed moment of this action-packed issue. The impressive roll call of Transformers featured here means every page is positively bursting at the seams with Transformer action. Sarah Pitre-Durdcher has done some truly fabulous work with this issue, it looks stunning, and the frenetic pace of the story flows beautifully from scene to scene, whilst the bold use of color and tone by Josh Perez & Josh Burcham differentiates each locale perfectly.

There has certainly been more than meets the eye to the Conquerors story arc, John Barber has crafted a brilliant saga, and Transformers #49 is an epic issue that seamlessly brings all the threads  together, and  establishes a startling new era that will lead us into Transformers #50 and All Hail Optimus: Part 1!