Review: The latest chapter kickstarts the next battle between the World’s Strongest – our fear-filled heroes – and the Titans now led directly by the Beast Titan. I think last chapter I mentioned I as excited for this fight. Mostly because I realized a few chapters back that Attack on Titan just isn’t good when it is dealing with human vs. human storylines or dropping big revelations that confusingly explain what’s going on with the world. This series excels when it’s humans vs. Titans so to see us getting back to that makes me really happy.

However what hurts this storyline already is knowing some of the secrets to the Titans and also knowing the identity of some of the Titans. Personally, I was very intrigued when I found out Annie was the female Titan, but since then the polish has worn off as we add Reiner in as the Armored Titan and Bertolt as the Colossal Titan – which, in my personal opinion, was a colossal let down for the reveal of the Colossal Titan’s identity.

I’m curious to see where this fight leads though as I’m aware that the Scouting Legion has a new weapon at their disposal but how effective is it really going to be? I do have faith in Isayama that he’ll give us a good show with the new weapon, but I’ll be sort of sad if this weapon gives the Legion the upper hand over the Titans. I dunno, call me sadistic, but I like seeing the humans struggle against the unstoppable behemoths. 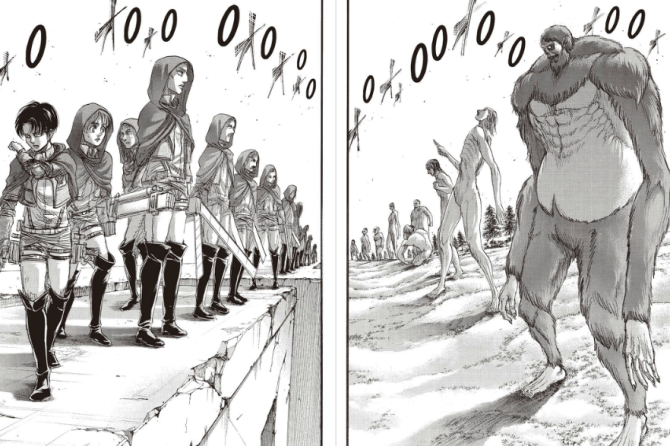 The art is great this chapter as usual, and we get to see the beginning of an awesome to come fight between Eren in Titan mode and Reiner in Armored Titan mode. However Isayama’s strategy of war definitely needs some thinking through. There is a moment in this chapter where they discuss the pros and cons to Eren flanking the Beast Titan and his troops by essentially running beside them and then running up behind them and somehow that counts as sneaking up on them.

Really, there’s more to it when you read the chapter and I’m just lazily explaining it but really when you think about the strategy while reading the chapter that’s all it really boils down to. More and more I question if Isayama had truly thought this world through before starting his manga and whether or not he’s just winging it at this point. As some of you may remember I almost rage quit a few chapters ago, and though I am more or less committed to the full ride at this point, I can’t say it won’t be a frustrating one. All I want out of this fight is for there to be carnage and for it to be good. This chapter starts that journey, and all I can hope is it delivers.

Final Score: 2 Saddleback Titans out of 5