As the Christmas season speeds by, we need to focus on the things that were extolled in those holiday Christmas specials we all enjoyed as children.  The joy of family and friends nearby, the lopping of body parts, the wonder of Santa…

Perhaps my head has been somewhat corrupted by Grant Morrison.  Again and joyfully so.

Welcome back to the village of Grimsvig, besieged by the corrupt and greedy Lord Magnus, who has put a ban on all toys save those for his spoiled son.  Klaus has recently been forcible expelled from the city (see issue 1) and had an encounter with some very glittery fly folk, who seem to have sent him into a trippy toy making frenzy. 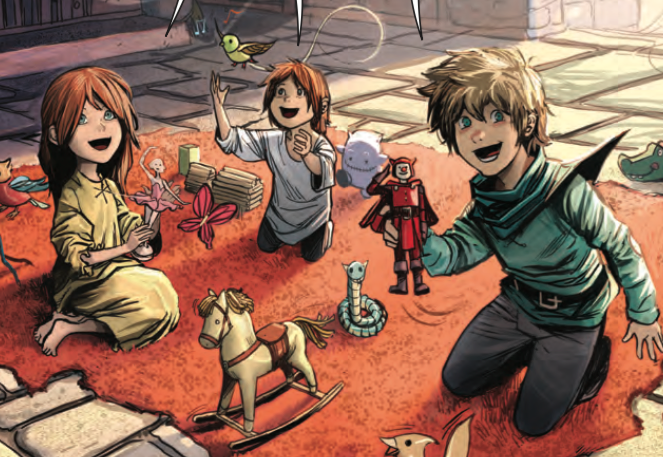 Issue 2 begins within the walls of the darkened town, as Klaus slips in over the walls.  Grimsvig guards have mythologized the man with the white wolf already, and, as those kinds of guards usually do on night watch, talk about how things are a little strange since he was banished.  The morning brings what you expect from a Christmas folk tale, happy children and toys galore.  Lord Magnus is on the scene to crush every bit of Yuletide spirit and confiscates all of the children’s toys for his son.  Meanwhile, back at the castle, Magnus’ wife makes a very interesting connection when she sees the toys brought back for her son.

Grant Morrison holds a place in the comic industry as one of the top writers.  Few occupy such a powerful position, and are able to hold it with such a deft hand.  He seems like one of those guys who could approach any company and say, “I’ve got this Christmas story…” and it would be a no-brainer.  It should be.

Morrison proves here that he can write a Christmas story with just as much emotion as he would write one for Batman.  He imbues Klaus with purpose without making it overly emotional and pat.  He doesn’t shove the “holiday spirit” down your throat, but he builds the story in a way that makes you care about Klaus.  As he builds this story it feels like the kind you read every year, or watch in beautiful stop-motion, with your family.

Dan Mora (Hexed) brings his talent into the Santa myth with such fantastic detail and style that you can’t wait to see more.  Mora’s figure work reminds me of Michael Turner’s work on Fathom, without all of the water stuff and tendrils and such.  The figure work is really strong, and his sense of architecture is strong as well.  He’s built everything that Morrison has imagined.

I really want to see Klaus as a Rankin and Bass production.  That’s probably not going to happen.  (If it does I called it here.)  Klaus really feels like a holiday special, but you know that Grant Morrison and Dan Mora have built a story that you will want to read over again, and you may not even wait until next year.