Letterer - Rus Wooton
Tokyo Ghost was a pretty enjoyable read. Set in 2089, in LA (eventually Tokyo) it’s a cyberpunk action/noir/love story. The concept is sound, and built upon other previous stories of this nature and style. Immediately I was having flashbacks to Ghost Rider 2099. I’m talking very first page, and the similarity in tone never really left my mind. That’s not to say it’s derivative of that series, but it probably finds inspiration in similar places as does GR2099, since that book itself wasn’t the most original. I’m maybe not well versed in enough cyberpunk to be able to denote the lineage of a work like this. Lets just say it felt like we were being thrust into a very well known kind of world.

Immediately, the actual concept of the story starts to unfold and then it begins to feel like it’s own thing. The relationship between the two main characters is something I haven’t seen before if I can recall. So how do I describe this book? It’s dystopian for sure, dark, gritty, ultra-violent very noir and very over the top. Some of the dialogue was laughably over the top, probably on purpose. It’s at those points in the story that it starts to feel like a dark comedy masquerading as a cyberpunk noir. It actually creates a bit of a counterpoint to the violence and heavy themes of technology overload and addiction. I’m trying to weigh how much plot to spoil here. Using the promo blurb as a guide, I’ll say that in this story, society is addicted to technology and digital content is the new drug. The main characters Led Dent and Debbie Decay want to escape LA for Tokyo, where there is no tech to be addicted to. If that sounds good enough for you, pick it up. If you feel like that sounds kind of cool, but you would want more from a story, trust me, there is more to it than that, that I don’t want to spoil it so pick it up anyway and see how much deeper it goes than that. 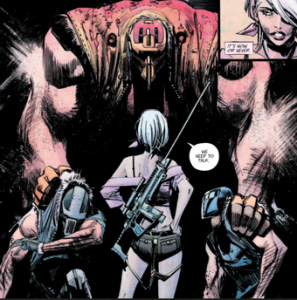 Remender’s story concept and plot are powerful and engaging. Sean Murphy’s art is spectacular. Hollingsworth’s colors are also great and fine tuned for this kind of story. The world building going on in the backgrounds on each page is great. They are laying out this world of LA in 2089 all visually. The action is really frenetic, and everything looks dirty and dark and broken. I’ve seen a lot of comic art in this style, but Murphy’s too damn good at it to call his art played out. It’s like it feels too familiar in some ways, but through pure skill alone Murphy is making it worth checking out. I think this is an excellent example of the right team for the right story. After the first issue, which was pure action, I want to see where this goes. It ends on a decent cliffhanger, and makes me want to stay tuned. I suggest that you tune in as well. If you like dystopian cyberpunk noir-dark comedy-love stories as much as I do (now), you owe it to yourself to check it out.