I knew String Divers was coming out. I saw the preview. I had it on my desktop, waiting for me to click it open. I hesitated. Why? I read issue one. I called it “a book that makes you want to learn” (or something to that effect). I remember liking it. I even had glimpses of the story still in my head. Why the hesitation?

I realized what it was as I read the first page. The essence of the String Divers as heroes is that they are disposable. They are on the path that we are heading down. They are the future of the “drone present” that we’re living in now. No matter how much personality you program into a robot, at what point does it become a likable character, one that we can sympathize with? I mean, don’t get me started on robot films. We all loved Terminator 2, perhaps even to the point that we rolled a tear as he gave us the thumbs up while sinking into a pool of liquid metal, but do we really feel for the character?

Of course, had I just trusted the excellent storytelling skills (it’s right there in the credits for crying out loud) of Nelson Daniel and Chris Ryall, I wouldn’t have paused at all. I had forgotten the point that makes these characters relevant and empathic. Though their bodies may be ripped in half (rest easy Red from issue 1) their consciousness is immediately downloaded into another body, waiting back at the lab. So these characters don’t die, ever, as long as there are replacements waiting.

Ok. So beyond that little snafu, of my own doing, here we go with issue 2.

The String Divers were witness to a massive ripple in the dimensional string in issue 1. A creature ripped through Red, and then through the dimension itself. This caused a wave along the string, which ended with a cruise ship vanishing from the surface of the ocean.

Now the team has returned and is demoralized. Mme. Carnivale has decided that it’s time for bigger guns, and calls on Phil, a lone diver who specializes in the manipulation of dark matter. He’s the lone gunman, the kid who doesn’t play well with others, and the team feels it, though they all begrudgingly agree that he knows what he’s doing. We also have a new Red, who is suffering from some pretty extreme ptsd. When they’re put back into the microverse, Mme. Carnivale shows her had once more, and her cards are always and forever shaded in secrets. (Plus she’s got a team of aces up her sleeve. Big reveal folks!)

This team of Wood/Daniel/Ryall makes up three of the multiple dimensions of this book. It’s good stuff all around. The science aspect is important to the overall story, but isn’t overly written and doesn’t dominate the plot. The creation of these disposable heroes makes for an interesting group of characters, and as in the case of Red, causes a bunch of extra tension as we see those characters put back into high stress situations. As robots they should be able to perform their jobs without fail, but these robots have personality, and that personality might change the way they execute. 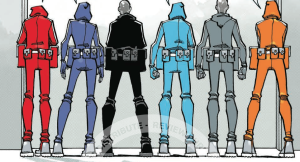 I love Daniels’ art, the very stringyness of the divers in their design, and the simple color scheme that differentiates them from each other. It’s a genius move, and one that draws parallel lines to other “color themed” teams from my childhood, like Voltron and The Power Rangers. Daniels uses color to great effect, and when we’re following the divers there is usually not much of it other than their uniforms. But that really sets them apart visually from the page.  Ashley Woods’ mark is also on the book, giving it a powerful artistic feel.

String Divers #2 is one of those comics that will suck you in if you’re not paying attention, and then even again if you are. The creative team has the best possible grasp on the four dimensions that we’re aware of. Here’s my pitch for Daniels, Ryall, and Wood…if you could somehow continue this comic in the fifth dimension…what a marketing tool…put it on your pull now, so that you don’t miss any more of the action.