There’s always worry when you see something you grew up with and really enjoyed being remade, no matter the format or medium.  Late sequels to films, adaptations, nothing is out of the realm of possibility.  Properties that were once thought “untouchable” prove very much touchable and remarkable.

Edward Scissorhands came out in 1990.  Take a second, if you’re in your late 30’s like I am, and think about that.  1990 was 26 years ago.  I don’t recall if I saw it in the theater or not, but I do remember seeing it around that time, probably on a VHS…dating myself.  I don’t remember raving about it…remember I was a 12 year old and I had just seen a fairy tale love story. (“Testosterone check complete” I thought.)  This was the second Tim Burton film I had ever seen with the knowledge that it was a Tim Burton film.  Being conscious of a director was a new thing for me.  (Batman came out the prior year and I lived Batman for a long time.)  What I do remember was that this was the first time I noticed how a director could influence a movie in a particular way, Burton’s design is evident in Batman and everywhere is Edward. 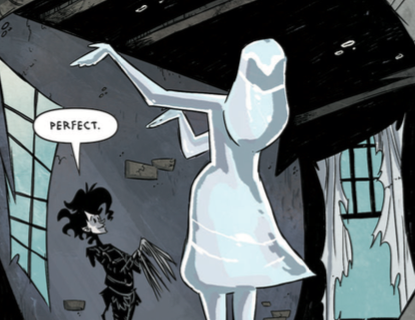 Long story short, I liked the movie and that was about it.  Later I would see how great it truly is as a whole, was a fantastic complete story, and grow to love it the way I love most thing from my childhood.

IDW has been very good at staying true to not only the feel of the original properties they publish but also to the adaptations they produce.  Kate Leth’s Edward Scissorhands is no different in that respect.  This is the trade of the first four issues, released this week.  Her tale takes place many years after the film ended and focuses on Megan, Kim’s granddaughter.  Kim has recently passed away, and Megan has her old diary and a pile of stories that Kim told her about Edward.  Kim’s daughter has been discouraging this fascination with the old house on the hill which only proves to drive Megan right to the front door.  Edward, meanwhile, has been a recluse in the house, looking through his father’s old journals, and finds that he was not the first or only experimental creature built by the mad scientist.  Eli is Edward’s brother and predecessor, a creature with “hostile” intent.

Leth (Lumberjanes) keeps that same brooding mood throughout the book that Burton dips each of his films in, that over-the-top gothic sensibility tinged with humor.  Her story is as heartfelt as the original.

Drew Rausch (Eldritch) uses a very cartoony style which also helps to soften the darker parts to he story, and add to the humorous parts.  Colors by Rausch, Jeremy Colwell, Rikki Simons, and Tavisha Wolfgarth-Simons also help to brighten up the story, much like in the original film when Edward comes down from the dark house to the “ticky tacky” pink and green and yellow houses in the neighborhood.  It’s softens the darkness.

Kate Leth has chased away the darkness of the adaptation, has lit the shadows that might come from beneath your bed, or from that creepy house on the hill outside of town, and has brilliantly written Edward Scissorhands for a new generation.