Summary: Yamada wakes up on an uninhabited island after falling off the cruise ship his class was on in the middle of the ocean during a thick fog. Alone, he begins building a raft and finding ways to survive until he discovers a female classmate has washed ashore as well. The two learn to survive together until one of their teachers washes ashore and generates animosity between the three of them.

After nearly two weeks of living on this island Yamada is swept up by a fog only to regain consciousness while being rescued in the middle of the ocean 15 minutes after he had originally fallen overboard. What is this new reality Yamada finds himself in? No one believes him about the island he stayed upon with his classmate Imaise Chika and their teacher Shibata. But when Shibata shows up unscathed and with no memories of what happened it’s now up to Yamada to discover the truth for himself and find the missing Imaise.

Review: With every set of chapters Let’s Lagoon gets more and more impressive. This is where we catch up to the series proper as it is still publishing in Japan. As of this writing the series is taking a month off, but once it comes back chapter 50 will mark an era of single chapter reviews. As I said however, with every set of chapters this series becomes more impressive and this set is no different.

While the stories are significantly scaled back this time around to focus more on the characters and their newfound lives on this island, the mystery of Future Yamada and the Island itself loom larger. Especially because we finally get an answer as to what this island is which offers up some hints of stuff to come but ultimately raises even more questions of what’s causing the island to act the way it does.

During her time with Future Yamada, Imaise learns more about this version of our hero and the future in which he comes from. While we don’t get any concrete answers as to what’s going on  in his timeline we do learn that he is dong all of this simply based off of what future Imaise told his younger self about her time spent with future Yamada. Closing a loop in this version of Yamada’s timeline.

We also learn that he’s come back in hopes of fixing a wrong that took place 10 years prior to his return to the island, so his past and our hero’s current present. As of chapter 49 however whatever that terrible event may be we have yet to learn. Although something tells me the tragedy will befall Nori as we have yet to hear about her future self. And both Miki and Shibata have already found their way off the island together. 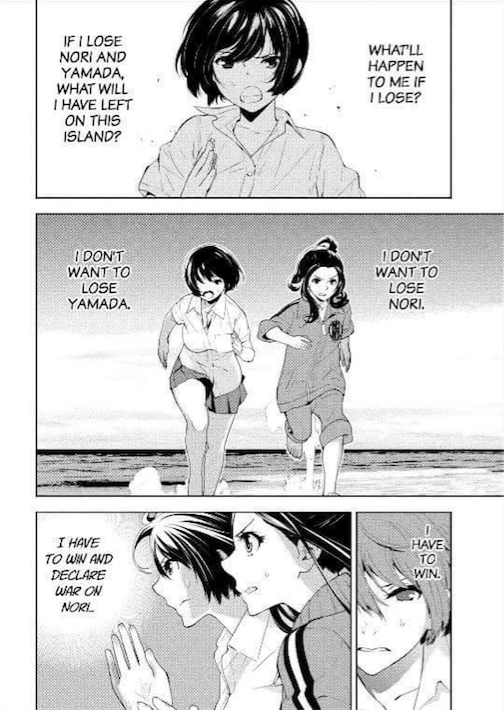 The Island is revealed to be a time travel resort from the far future, even further into the future than even future Yamada has experienced. But why the island has found its way into our time, as well as why its going all haywire on our heroes still remains a mystery.  Ultimately I don’t mind this twist on what exactly the island is. It does make sense as to why the island began turning into a perfect haven for our cast because its meant to mimic any place you would like to go.

I’m now more curious as to why the island is freaking out as it is all of a sudden and what this may mean for our characters going forward. Eventually Imaise and Future Yamada go their separate ways and she’s forced to keep the entire affair a secret. However Nori is thankfully smarter than that and actually recognizes the future version of Yamada because his face resembles that of the guy she’s really liked for years now.

Nori continues her streak of being my favorite character of the series for her sheer honesty and intelligence. She knows that this is info they must keep from Yamada and never once hangs it over Imaise’s head as leverage. They are still best friends however. But she does enlist a competition between the two to decide on who will get to be with Yamada in the end.

This is a big step for Imaise to accept the challenge because throughout this series she has been vehemently against the idea of liking Yamada even though it’s so obvious. To the extent that her character almost became full tsundere several chapters ago when Yamada accidentally saw her naked. In the last few chapters of this set however she realizes that yes, her feelings for him are genuine and that’s okay. Even if it will hurt her best friend, both Nori and Imaise are aware of that risk and go after their futures against one another. In a breath of fresh air though, both go after it in a way where they understand it would be better not to end up hating one another over this.

I love that so much.

Imaise also backtracks on her actions against Yamada where she needlessly yelled at him at the hot springs in the last set of chapters I reviewed and apologizes to him for how she acted. It’s these kind of grown up moments that this series is filled to the brim with that are a big part of why I keep coming back. None of these characters are perfect, but they’re all quick to understand what they did wrong and sooner or later they make due on their apologies so that no one needlessly hates the other during the duration of the story. In other words, they talk to one another.

I’m definitely looking forward to what comes next for Let’s Lagoon as this little known series has truly captivated me at every turn. Not every chapter is great, some are light-hearted while others are heavy, but in the end there’s enough character moments going around and mysteries still to be solved that I can’t help but come back for more and be excited for each next installment.