It was a bout of the flu that got me hooked on the adventures of the time-traveling doctor. One of my friends had been shocked, appalled that I had never seen the series. I told him…”there’s just too much…too much history and too many episodes…too much overall to get into for me to begin watching it…” He lent me series 5, the first incarnation of the 11th Doctor, Matt Smith, and it sat on my shelf for a couple of weeks.

Then the flu. As I lay on my couch, ill and wanted nothing more than to stay there, I thought, “Might as well see what the fuss is about…” and put it on.

It was the best flu ever. Now I’m hooked, my wife is hooked, my oldest son, we have a TARDIS cookie jar, my phone case…you fans know how it goes. Titan Comics acquired the rights to Dr. Who last year, and since then have been flooding the comics market with more and more Who books, featuring regular series with the 10th, 11th, and 12th doctors.

This series is the kind of thing that I both worry and hope for. Not because of any doubt in the creative team, or brand faithfulness from the company, but just because it seems like perhaps too much of a good thing. (Note: I understand about favorite doctors. Mine is the 10th. I know that everyone has their favorites and that no one can convince another to change their minds. I do like them all though, because the characters are always so strong.)

This book is the latest in Titan’s Who-verse, Four Doctors, a crossover event that could collapse all of space-time. If you’re a fan of the show, then some of this will make more sense than to others, but it’s mostly explained in the book so don’t worry that you’ll be left in the dark.

It starts on a planet called Marinas, during the last Time War. The War Doctor (portrayed in the series by John Hurt, whose likeness is used here) is fighting the Daleks, and as allied himself with the Voord, a hive-minded race that has benefited greatly from the war and is worried the Time Lords will change all of that when the war is over. 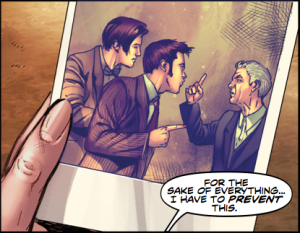 Paris, 1923, all of the Doctors converge on one point in time, a fixed point, and meet up. The companions are there as well, 10’s Gabby Gonzales, 11’s Alice Obiefune, and 12’s Clara Oswald. Clara found a picture on a previous trip that she learned must never happen, the picture of the three doctors arguing on the surface of Marinas. She’s trying to convince the other companions to get their doctors out when said doctors come in, and all hell breaks loose.

The Reapers appear, creatures that fly through space and time to eat time-space anomalies and fix reality. The doctors flee into their Tardises, and, upon learning of the picture, go straight to Marinas to see what’s what.

The story could understandably be confusing. Paul Cornell does a fine job with it, having three different characters who are essentially the same person could become a tangled mess, but by sticking with the individual doctors, and staying true to their character, he keeps them separate. Cornell also has a bit of fun with the three, playing them off of each other, making them poke at each other’s flaws. I think the part I liked best was seeing the companions together, comparing each other’s doctors, and trying to influence them in the ways that only they know how.  There’s a ton of history to take into account when writing about hundreds of episodes of existing continuity, and don’t believe for a second that there aren’t thousands of fans waiting to jump on the slightest mistake.  Cornell does his homework, and is obviously a fan himself. 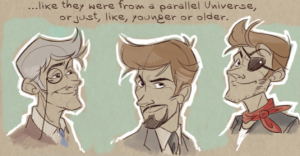 The art is fine. Neil Edwards captures the likenesses of the doctors and companions alike. (Although I believe Gabby and Alice are both comic universe creations.) There is a section at the beginning of the issue that is really cartoony, and I actually enjoyed that a lot. I kind of wish they would publish a younger audience comic in that style.

Four Doctors, one comic. I know that this happened in the series as well, but as I’m only halfway through the eighth series I don’t know that this is the comic version of that. If so, then I’ll be excited to see it. Because of the inclusion of Alice and Gabby, I feel like this is probably just in the comic universe, and that’s ok too. The beauty of the Doctor is that he has a time machine and an almost infinite life. His companions are varied, as are his adventures.

Four Doctors is just another chapter in this great series, and I look forward to seeing what Cornell and Edwards do with the rest of this series, and how they get each of the doctors out of the mess they’ve dropped them into. It’s easy to get into these stories, because they seem like another episode of the show.