I try to keep my reviews tasteful. I try to refrain from curse words as adjectives because they don’t usually expand upon an idea any more than a regular adjective might. I may have to make an exception here. Godkiller Volume 1, what an amazing [email protected]#kin’ book. (and I don’t use my keyboard characters lightly.)

This review is comprised of the first Godkiller trade, Walk Among Us, that collects the first three issues, and the 4th issue of the series that just released a couple of weeks ago.

I hadn’t heard of Matt Pizzolo’s book. It wasn’t on my radar. Ugh. How many other awesome things am I missing? Pizzolo (Occupy Comics, Twelve Reasons to Die) has given us a mind bending, reality warping post apocalyptic world in a way that I’ve never seen before. 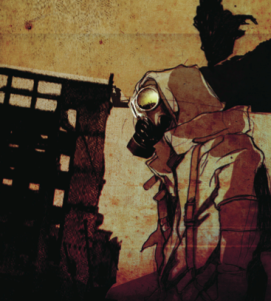 Pizzolo weaves a story filled with prophecy, Frankensteinian body mending, blood lust, regular lust, and magical weirdness that is hard to put down or look away from. The characters of Dr. Mulciber, Halfpipe, Tommy, and Beezal are threaded together in a patchwork worthy of Mary Shelley and Terry Gilliam. Tommy is an orphan, doomed to a life in a state institution where he watches over his comatose sister. Halfpipe is a whore and organ thief, trapped in a life that she has no hope or idea how to escape. Dr. Mulciber is a strange and seemingly immortal mystic with his eyes on a prize no one can see.   Against them all stands Beezal, the androgynous whoremaster, who uses his criminal empire for whatever he wishes. And at the center is Tommy, young and confused and living the pitiful life he can scrape together in the blasted landscape of the future. It’s dark and bleak and wonderful.

Tommy’s journey towards an unknown purpose is strange enough, but at the same time we get glimpses of what the world has become, with patchwork people, sexless and oversexed at the same time, trading in flesh both alive and dead. The air is poisonous and it has leeched into society. Pizzolo has history built in to the story, and we get glimpses of a great battle, of the victors and the defeated.

The story, as fantastic as it is, could do no better than to have the illustrative talents of Anna Muckcracker Wieszczyk. Her style seems a mix of all types of media, from photo-realism to collage to straight up illustration. It’s the perfect backdrop to this world, and she captures it not only in the disturbing images she must create, but in the coloring and framing she chooses for the pages. Wieszczyk’s work compliments the no holds barred feel of the story, and she assaults your eyes with so many crazy images that you almost have to go back and look at them again to make sure that they are what you thought they were.  Add to it additional illustrations by such huge talents as Ben Templesmith,Tim Seeley, and Amancay Nahuelpan, and you see how powerful this art is.

I see shades of Blade Runner, Twelve Monkeys, and Dark City in Godkiller, and at the same time something I haven’t seen ever before. It’s a whole new world of “holy crap that was weird”. Pizzolo isn’t afraid hit you with everything and worry about the damage later.

Godkiller is one of the most original and daring books I’ve read in years, so much so that I had to go ahead and read the fourth issue without a break from the trade. Pizzolo and Wieszczyk have created a disturbing and dour reality that I wouldn’t ever want to live in but can’t seem to tear my eyes away from. After all of that, I still find myself stuck with the same adjective-weak phrase, this book is [email protected]#kin’ amazing.