This issue could easily have been subtitled “A Tale of Two Batmen” as Jeff King brings the much older, weathered and chemically dependent Batman of Earth 2 and the younger, more idealistic pre-Flashpoint DCU Batman face to face in the midst of the chaos and turmoil of the Convergence event. That premise alone is enough to fill the page count of this issue but King delivers much more as the writer delves into the climactic events of Earth 2: World’s End and brings that universe’s Dick Grayson front and center for this current conflict. King very cleverly contrasts this Grayson with the classic version of the character by establishing the Earth 2 counterpart as a far more tragic and hardened character thus more competent to handle the trials ahead of him.

Issue Two of the main Convergence title is far less concerned with set-up, in fact it’s much more action packed than the previous two chapters combined; Telos has been established as a major antagonist, the premise of the 40 bottle cities is now well known to readers and now the plot can progress at an accelerated pace right? Yes and no. King is still very methodical when it comes to exposition and has a tendency to over-explain with narration some things that artist Carlo Pagulayan is more than capable of conveying via his dynamic and detailed artwork. This is most likely due to King’s relatively short tenure as a comic book writer, although he is an incredibly accomplished television writer and obviously talented, Convergence is his first major comic book event. This fact doesn’t diminish what he has done so far; in fact I’m even more impressed with his work in light of the fact that he has such little comic book experience at this point. 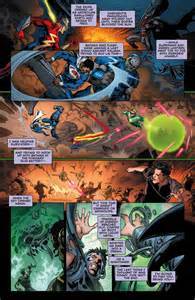 The Earth 2 heroes face Telos in one of the issues big action sequences; Pagulayan really shines in these scenes. His work is tight, clean and energetic with attention to staging and pace. The main characters are then separated and the stage is set for a Batman and Robin reunion, of sorts but not really. Earth 2 Batman aka Thomas Wayne, the self-medicating doctor teams-up with Dick Grayson, the left-leaning journalist as they face whatever may be waiting for them in one of Telos’ many cities now serving as battle arenas. There is not only a bit of a tonal shift at this point but there is a sense that the stakes have been raised and the narrative and the pace reflect that change in momentum. King has been building up to this sort of surreal Wayne family reunion literally from the very cover of this issue, so when it happens there is a very definite weight to the events as they unfold. We see these two iconic figures come together through the eyes of Dick Grayson. He narrates the scene providing an air of foreboding, but perhaps even more than that his words give this monumental meeting a context and a thematic poignancy relating to fathers and sons that is absolutely undeniable and effective. 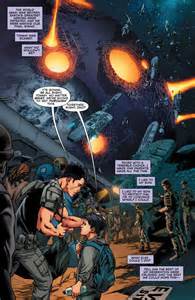 Once again Carlo Pagulayan’s visuals are completely stunning; particularly in this issue’s huge pivotal scene of the two Batmen. There is one particular page that stands out for me where Pagulayan renders a downcast pre-Flashpoint Batman standing in the Bat Cave atop a small set of steps looking downward as though peering into an abyss, his stern face obscured by shadow as the unseen weight of circumstances threaten to crush the dark knight Detective. This is easily one of the most dramatic pages of the entire Convergence arc thus far. Every page is lavishly detailed and Pagulayan makes such effective use of his panels that there is a fluidity of motion to his work here, a sense of cohesion and movement that feels organic as the narrative grows and unfolds through his images. Peter Steigerwald’s vibrant palette works extremely well with Pagulayan’s kinetic style of visual storytelling, enhancing the energetic pace even further.

King and company continue to impress as each successive issue builds upon the last in both momentum of pace and sheer excitement. The writer seems to be getting his footing a little more as the narrative unfolds while Pagulayan and Steigerwald consistently blow minds with every single panel of eye popping imagery. Convergence may not be the kind of big event that hits the ground running at full speed but its slower, more methodically meticulous approach is entertaining and satisfying nonetheless. Those of us who love continuity based, big picture pay-offs are here for the duration and loving every detailed filled minute of it. If you are like me you are even reading all of the two issue Convergence tie-ins, some of those were really good this week and definitely worth picking up as well. (4/5)