In 1999, at the very turn of the century, a film was released that changed the way we look at sci-fi icons. I don’t remember seeing ads for it, but I do remember seeing it on the shelf in the video store. (Video Store definition – a building or store front designed to house and rent VHS tapes and later DVDs, for the purpose of watching them in your house but which incurred enormous, unpayable debts if returned late.) Once I watched it I knew it was destined to be a classic.

The premise is simple. There was once a show called GalaxyQuest that ran for only a short time but became a cult classic, to the point that the actors who starred in it are now doing the con circuit. Those shows were picked up as they traveled through space and interpreted by an alien race as historical documents, and then those aliens recruit the crew to help stave off annihilation. It was a great film, poked fun at Star Trek in all the right places but never talked down to it’s audience, and was generally just fun to watch.

And IDW has released it in comic form.

This week marks the release of GalaxyQuest #2. It finds the crew at odds with Dac from the planet Dryth, an alien who can camouflage himself and take on the mannerisms of whomsoever he desires. He is there to coerce the crew into another mission, one that will bring them in the sphere of deadly harm, with the end result being the freedom of a planet.

Burnham has a history with licensed material. His run on IDW’s Ghostbusters has been fantastic, filled with minutiae that only a true fan would know. I don’t know this universe like I do that one, but I can only assume that it will be more of the same. He has the talent to slide references into the regular text and dialogue that recall the original indirectly, so that you’ll only get it if you’re a fan. It makes you want to re-watch the film and then re-read the books as well. He plays with classic old television serial tropes and the consequences those should have for a wider universe, but never seem to the following week. It all reminds me of that scene from Misery, “…he didn’t get out of the COCK-A-DOODY CAR…” Tricks that TV writers come up with to knock out the wall they painted themselves in to seldom had an effect on any of the following stories. Here they do. 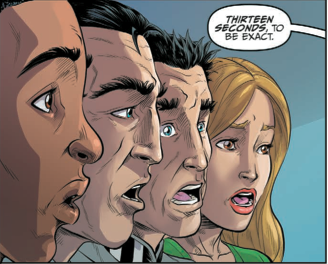 Nacho Arranz and Esther Sanz are on pencils/inks and coloring respectively. I’ve not seen their work previously, but I like the way it looks. It would be costly and time-consuming to have to get releases from all of the actors from the film to sign off on their likenesses for a comic book, and Arranz has altered their characters enough so they don’t specifically recall anyone in particular, but left just enough the same so that you can still connect with who each was in the book. Sanz’s colors are bold, just like those in the film, and it works for the overall look.

GalaxyQuest #2 is pitch perfect, and for fans of the film a great way to fall back into that universe. Erik Burnham and Nacho Arranz will once again get my money, because this one is a keeper.