I will admit that TREES is starting to grow on me a little. In four issues Warren Ellis has established the foundations of a story that for now, I can only describe as ambitious. Character development has been good all around, especially with the Scientist (Marsh), who was the protagonist who I had cared for the least. This was until his character finally unraveled though a very well built-up portrayal of relatable human emotion in Trees #4.

The context of this panel is way more impressive in the grand scheme of things I assure you.

TREES however, still suffers from many of the issues that lead me to brand it as a ‘pass’ in the first place. Again, I must stress how TREES’ art simply does not compliment its story, and sometimes even distracts you from it. I’m not saying Jason Howard’s art isn’t good by any stretch of the imagination. In fact, it’s damn gorgeous at times. No, all I’m saying is that his art just doesn’t befit what TREES is trying to be, which as of this point seems to be heavy social commentary science fiction.

Aside from the obvious issues I have with the art, the plot direction of TREES has been unsurprisingly well done throughout the past four issues. As a number of interesting characters have been introduced and developed. Story wise, the pacing of TREES is slow. Which isn’t necessarily a bad thing, as it seems the story is gearing towards a “humans are the real monsters” kind of vibe, which has potential. But it is difficult to stay invested in a particular character’s storyline, as there simply isn’t enough space to cover all of them in an individual issue. This normally wouldn’t be a problem, expect the various storylines in TREES differ so heavily in how interesting they all are. Undoubtedly though, it’s safe to assume that each thread in Warren Ellis’ plot will ultimately weave nicely together in the end. Some major plot points are beginning to take shape, and there seems to be a major turning point and/or twist coming up in the upcoming issue, which is teased at the end of TREES #4. 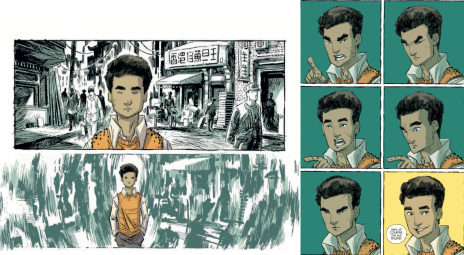 On the left: Great art. On the right: No so great art.

Verdict
Chances are that at this point, you are already either heavily invested or quite disinterested in TREES. Honestly, I would have not have come back to the world of TREES if the opportunity to re-visit it via a review of TREES #4 had not presented itself. And everything that originally made me dislike the series remains. The story has potential, but my suggestion/verdict for TREES #4 is still a pass. If, like me, you decided not to get invested in TREES after the first issue, then there is really no reason for you to attempt to get into it now. I will say however, that TREES looks to be something that’s in it for the long haul. Therefore wait till at least the first story arc ends, and maybe by then, a TREES Vol 1 would be something worthy of spending your hard earned money on.

Franco Romualdez is a young writer from the Philippines. He likes sports, Sci-Fi, and neo-geek culture. He also enjoys writing his own particular brand of poetry, if you’d like to call it that.