Dan Slott has reached that precarious area in the hearts and minds of Spider-Man fans where you either love his work on the character or hate it.  Although there may be varying degrees, there really is no middle ground when it comes to opinions on what the prolific writer has done with our beloved Web-Slinger. I was one of those who initially thought I was going to hate Superior Spider-Man only to find myself anxiously awaiting each successive issue in the wildly captivating run so, it is fair to say I now have a great deal of faith in Dan Slott and his vision for Spider-Man’s future. That being said, it is no wonder I am over the moon with what Slott has done in the short time Peter Parker has been back in his body and costume; Amazing Spider-Man #1’s subsequent decimal point issues have been a clever, exciting romp through Peter’s early days as Spidey; set in a rather ambiguous time, the narrative conveys both nostalgia and a sense of evolution of character. 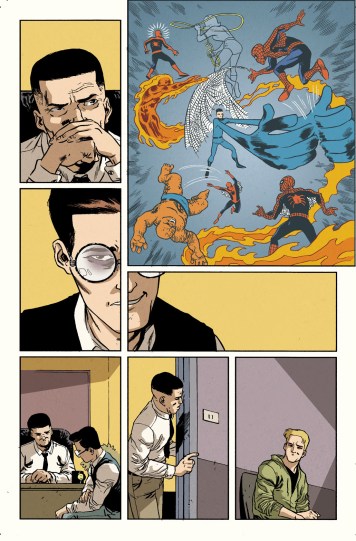 In this issue we see Jameson step up his public campaign against Spider-Man as he rants about the dangers of young people imitating Spidey as a misguided form of hero worship. The outspoken editor’s outcry proves true when another costumed would-be hero shows up on the scene calling himself Clash, the spectacular sultan of sound; better known as Clayton Cole, the young man shares an aptitude for science, unpopularity amongst his peers as well as a penchant for spandex and heroics with Peter Parker, making their first meeting in costume that much more poignant. Meanwhile, Peter is having more than his fair share of problems to deal with; on the Spider-Man front, he is wanted by police, rejected by the Fantastic Four and all but unemployable by his shady excuse for an agent, Maxie Schiffman. Unfortunately things are no better in his life as Peter Parker, his grades are taking a nose dive due to his web-slinging escapades taking up much of his study time, Flash Thompson is making his school life a waking nightmare to the point that his Aunt May has him seeing the school counselor, Mr. Flanagan. Flanagan introduces Peter to the world of extracurricular clubs including, A.V., chess and Mathlete club. It is then that Peter notices a flier for a science fair boasting a first prize of $10,000 in college funds; this gets his attention as he and Aunt May are struggling financially. As if his plate wasn’t full enough, The Chameleon contacts Peter via a transmission on the same wave length as his Spider Sense which leads to the first of many confrontations between the hero and the appearance altering villain. Meanwhile Clayton Cole has scored an advance on his science fair entry, so in full Clash attire, he takes the money straight to Schiffman in hopes of hiring Spider-Man for a taped and scripted one-on-one battle in which, of course, Clash is supposed to come out on top. Needless to say things go awry and lots of chaos and excitement ensues.

Slott is doing a great job capturing the freshness of Peter’s early days on the job as Spider-Man. There is a sense of awkward, unsure discovery surrounding not only his newfound powers but in how to best use them for good. The character interactions are genuine and convey an authentic teen-aged sensibility albeit a sometimes timeless one and not always in a modern sense. Slott has set this narrative in a rather indistinct time, there are elements that would place it in several eras with equal rationality however there are just as many that would justify another era. Is this Slott cleverly masking the exact year to give the narrative a certain timelessness or is it just a convoluted timeline that has become very much like an unsolvable puzzle, I tend to think the former is true and what’s more I applaud Slott for doing this. I don’t think Peter Parker needs to use an iPad or wear an Imagine Dragons t-shirt to be relevant. This story transcends time and I think Slott very astutely conveys that point but blurring the time in which the story is set, there are modern references as well as elements from other bygone decades but it all comes together cohesively and never detracts from the plot. The same can be said of the dialog; Peter speaks the timeless language of wit, often with a liberal helping of sarcasm and that never goes out of style.

One thing that is becoming increasingly clear to me after reading Slott’s Spider-Man for quite some time now is that the writer seems to have a much deeper understanding of Parker as an adolescent teenager than he does of the adult version of the same character. Slott masterfully deals with the personal and ethical conflicts of Peter in this issue as a teenager; however there have been times when the same could not be said of Peter’s adult coping abilities. Of course that could be accounted for by the life-changing events that have occurred in the years between, but somehow the actions of the younger Parker seem to ring a bit more true. A working knowledge of the original Spider-Man #1 goes a long way in shedding light on this issue; Slott has given us a sharper focus on the events of that prototype origin story and in so doing he has filled in many blanks in the areas of morals, emotions and regrets. In a sense we can now appreciate those iconic words, “with great power comes great responsibility” in a much more profound way than ever before. 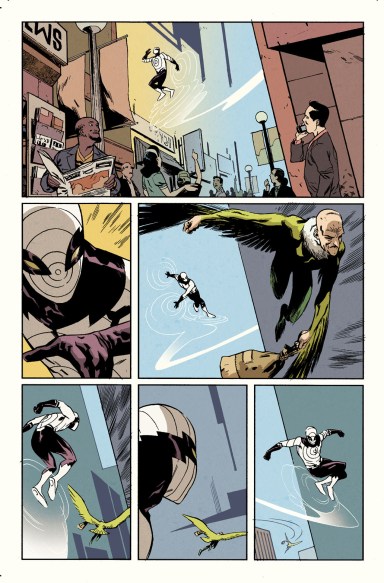 Visually Ramon Perez is a perfect fit for this narrative. He calls to mind the sensibilities of Ditko with the modern influence of Chris Samnee resulting in a dynamic style that is heavily inspired by graphic art and design elements. His storytelling style is highly cinematic; through his effective use of panels and cohesive page composition Perez brings a kinetic energy and fast paced excitement to Slott’s already vibrant narrative. Particularly impressive are the panels in which Perez renders classic versions of Spidey’s rogue’s gallery. Ian Herring’s solid palette of subdued colors adds a deeper degree of authenticity to the nostalgic tone of the imagery completing a very effective approach to the material and creating a look that is unique and original but pays homage to what came before.

Overall I am a huge fan of Slott’s work on Spider-Man, I know that not everyone echoes my praise for his more recent Web-Head endeavors but as I stated at the beginning of this review, you either love his work or hate it and so far, I’m loving it. If you were not a fan of Superior Spider-Man I would suggest that you come on back and give this new Amazing Spidey a try, pick up #1 and the following .1 and .2 issues, if you love Spidey, I bet you’ll like it, these stories are full of all the things we love about Spidey. (4/5)