Greetings fellow residents of Gotham, so happy you could join us for this week’s edition of The Weekly Bat-Signal where we, the faithful gather every seven days or so to discuss The Dark Knight Detective in detail and discourse on all Bat- related minutiae END_OF_DOCUMENT_TOKEN_TO_BE_REPLACED 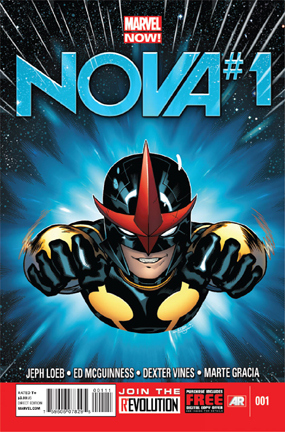 My history with Nova as a character is somewhat spotty, but he’s always been one interesting enough to me to ‘dip in’ when I could.  I’d find the random issues of the original series in the cheap-o comic boxes when I was a kid, and would usually pick up one or two.  It wasn’t the greatest comic or most original idea (it was always targeted for being “Green Lantern” meets “Spider-Man” - Spidey due to Nova being a teenager, “Green Lantern” due to his being a member of a multi-species intergalactic police force - the Nova Corp), but I loved the character design, the look of the comic, and well - it was just fun.  And cheap, too!  When they brought the Richard Rider version of Nova back with the early 90′s “New Warriors” title,  my interest grew even more.  As that title went it’s own way and I ventured elsewhere, I noticed over time that Nova was showing up more and more in the Marvel Universe, even getting a few mini-series and titles here and there.  Sadly, I never had the chance to pick up any of those series as they came out, but that’s just fine at the moment.  Why?  Because Nova is back.  Sort of.  No more Rider, enter Sam Alexander.