Welcome back to Dynamite’s U-Noir-verse, the world where hard-boiled criminals go toe-to-toe with tough gals and even tougher gals. In this, the second offering from Victor Gischler, the focus is directly on the women of the universe, Black Sparrow and Miss Fury END_OF_DOCUMENT_TOKEN_TO_BE_REPLACED

Let’s be clear: I LOVE FRANCESCO FRANCAVILLA. That is a fact. You NEED to know that right off the bat.

And another point of interest: You NEED to love Francesco Francavilla, too! Beyond being one of the industry’s most sought after cover artists he’s also one of the absolute best comic book storytelling artists in the game. END_OF_DOCUMENT_TOKEN_TO_BE_REPLACED 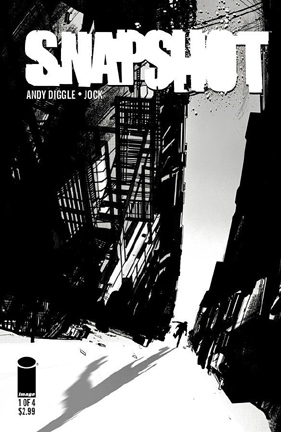 I first saw “Snapshot” #1 solicited in ‘Previews’ not too long ago, and was instantly curious about this mini-series.  Being a big fan of Jock’s artwork, I was excited to get this black & white Noir story in my hands.  Not knowing much of writer Andy Diggle aside from his shining list of previous works, I was secure enough with the premise to pick this up the day of release.  I was not disappointed, I can tell you that!  The story is a simple but brilliant one - Jake, a worker at the local comic book shop ‘Near Mint Rhino’, finds a cellphone lying in the grass at Golden Gate Park in San Francisco.  Thinking he has found himself a good way to make some easy money, he pockets the phone and heads off.  Arriving at the comic shop, we are introduced to Steve, who not only seems to be the store’s most loyal customer, but also somewhat of a friend to Jake.  In the store they talk about some hard to find comics, until Steve is pulled away by a call from his girlfriend, who is back at home organizing what looks to be their part in an anti-war rally.  While Jake is alone in the shop he decides to check out what he can find on the lost phone, and is very surprised by what he finds - possible photos of a murdered man, bullet to the head.  This is where the story takes a turn for the dangerous, and where the core of this story really starts to take off.

Jock’s art is as crazy and fun and amazingly rendered as always, and the lack of color makes his lines and shading all the more important, and handles that weight in spades.  His use of shadowing and light makes this seem like some old television show or film as seen through a modern gaze, telling a modern story.  A number of the panels need to be posters of some kind, the art really is that strong and iconic.  Put under a lot of other artist’s eyes, this could have turned out to still be a readable and enjoyable title, but Jock’s work really takes it for me.  It’s just beautifully drawn black and white artwork.  The many ways his style works for the tone and subject matter at hand is proof of how versatile an artist he really is.  Coupled with a great script by Andy Diggle, this comic waves you through its pages, like riding a river of awesomeness.  It’s not light fare by any means, but the way it is written, and the way the art is so perfect for the script, creates a comic that reads fast but leaves a long-lasting taste of grime and dirt in your mouth.  It also makes you want to tear through the calendar and get a hold of the second issue directly after finishing the first.

I was not surprised in the least that I enjoyed this first issue as much as I did.  I had been looking forward to it, creating my own hype in my head and to friends, and it has met all expectations.  If you’re looking for a non-superhero book, or if you enjoyed Image’s recent “Happy!” mini-series, I really think you’ll enjoy - maybe even love - this title.  I know I’ll be back for Issue 2, just as soon as I can get my eyes on it.  A really outstanding book in all ways.