Review: Another fantastic chapter as MONfest continues! In the third installment of what will probably end up being a 4-arc story, Kimihito gets to go on a date with Tio. The giant Ogre of MON Squad.

This really may be the best chapter Okayado has penned yet. There is no villain this chapter, no true obstacle for the character to overcome. We get the spotlight placed on Tio and two other Monster girls – one we haven’t seen in awhile and another that never gets any actual character progression – and just a fun date to be had overall.

The biggest form of obstacle is Tio’s strange relaxing aura that makes it hard for people and monsters to resist her. Everytime she tries to comfort Kimihito who’s been utterly exhausted after his first two dates with MON, he has to force himself to find something to do in order not to fall too deeply into her charm.

You would imagine this to be setting Tio up to be some sort of villain but it’s the exact opposite. She just cares that deeply for others that its easy for you to trust her instantly and I really like that. Tio is an amazingly kind ogre who is just wants to see others happy and as we see by the end is willing to put others before herself when they need help. 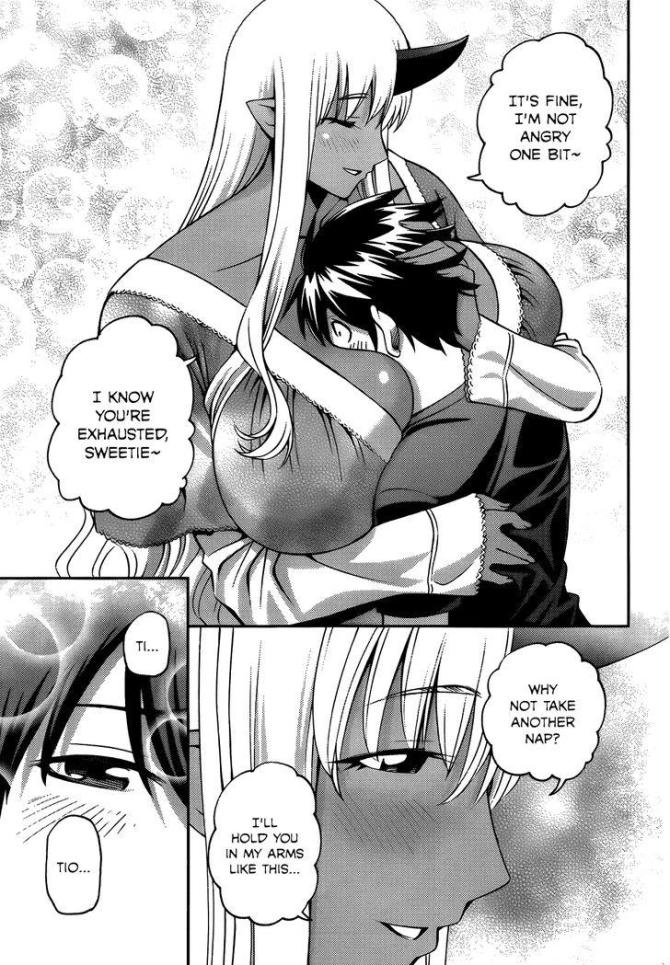 As Kimihito and Tio are enjoying their picnic in the Forest we get some unexpected visitors in Polt and Kii. Polt is a Werewolf who runs the local extraspecies gym and is someone we have seen running around before in numerous chapters. But she’s always relegated to a background character. Kii is a druid we saw far back earlier in the series and is good friends with Papi and Suu. She got an entire chapter dedicated to her but it’s nice to see her return.

However for both Tio and Polt this was a great chapter. As Polt and Kimihito try to clean up the Forest for Kii so that she will become healthy again we get sly comments thoughout of Polt having tried to get others to help her clean the Forest but to no avail. At some point she breaks down and surmises that no one probably likes her and Tio is there to comfort her and prove to her that there are plenty who do.

It’s a very nice moment between these characters that  I truly enjoyed seeing. It’s really, really nice to see Okayado using MONfest as a way to highlight some of the supporting cast as well an give the main cast of monster girls a break.

When things become too tough for Kimihito and Polt to do alone, Tio, who’s been trying not to get her clothes dirty this chapter, gives that up and helps them finish off the cleaning. This leads to the discovery of an Auger and upon removing it the discovery of a natural hot spring. Which brings Kii back to full health in the process.

This really is a sweet, well-paced and well-written chapter and gave me a whole new love and respect for Tio that we never got to see before. As well as a new appreciation for Polt. I still can’t decide who from MON Squad is my favorite just yet but after this chapter it may just be Tio for her true gentle and lifting spirit.