After the crazy success of The Dark Knight Returns, there should have been no worry about the release of a second volume in the series.  Eight years after the 1986 release, Frank Miller was back in the world of the aged and curmudgeonly Bruce Wayne, with plans to expand the universe in a way that would bring in many other DC mainstays.  Expectations were high.

The results, popularly, were mixed.

Since that time, there has been ample time to digest the story, to let it sit in the popular subconscious, working in that way only a Frank Miller story can.

I reread The Dark Knight Strikes Again.  Pair my new reading of the story with the popular opinion that I’ve absorbed over the past ten years, and I have a new appreciation for the story.

Years have passed since Bruce Wayne “died” in the epic fight with Superman in Crime Alley.  The government is under the control of a few highly powerful villains, Lex Luthor and Brainiac.  The President is a computer program.  The Media (purposely capitalized) is all-important, the trend setters and decision makers.  Heroes have stayed on the down low, including Batman, who has spent these last years training an army of batboys to keep the streets safe, led by Carrie Kelly as Catgirl.  Superman is a tool of the government, just as he was in the first Dark Knight story, but this time he is working against his will, as the bottle city of Kandor has been stolen by Brainiac.  The last Kryptonians’ lives hang in the balance. 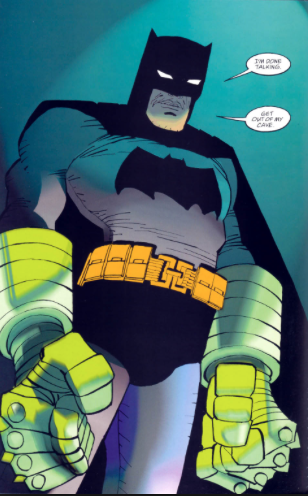 Batman has an agenda, (of course).  His crew begins freeing all those heroes imprisoned by the government.  This is one of the things I like about this book.  Dr. Ray Palmer, The Flash, Green Arrow (with a new bionic arm), Green Lantern, Ralph Dibney, Wonder Woman…all make appearances in this book, all with key roles to play.  Plastic Man plays an insane role, as does a Joker imposter, who kills without thought and regenerates every time he himself is killed.  (The Joker really did die in the first volume.)

The highlights are numerous, despite what popular opinion might say, and true to the character of Batman.  The fight with Superman is epic, a royal beat down, planned in the most perfect way, just as Batman would.  The inclusion of all of the extra characters is great, including the manic Plastic Man.  The new generation of hero is in the spotlight.  Carrie Kelly and Lara, daughter of Superman and Wonder Woman, tries to puzzle out her existence and purpose through her mother and father.  These are all great themes that Miller explores in the book.

But it does get lost.  The media, which plays such a huge role in the first book, the popular thought machine that influences public opinion overshadows much of the rest of the book, adding a lot of exposition that could better be told through the main characters.  I love Miller’s style, but here it seems to overtake the story on the whole, making it harder to follow the narrative.

The art style changed as well, with Miller forsaking the deeper shadows that so characterized his earlier work for a much lighter and cartoony style.  The work is definitely still Miller-esque, but the ten years between the two books made for a major change in style that I think threw readers off.  I like the especially stylized Wonder Woman and thinner, leaner looking Batman, as well as a haggard Supes.

Take the art change and uber-complex storyline, and The Dark Knight Strikes Again is a different beast than it’s predecessor.  But it should be.  No decade should pass for an artist that he or she doesn’t change and evolve, and who would want that same thing over and over again?  No one.  It also makes this book as a prequel to The Dark Knight III:The Master Race all the more important.

If you read The Dark Knight Strikes Again when it first came out and disregarded it as inferior, or if you’ve never read it, give it a change.  It may surprise you.