There are not enough Western comics in my opinion.  Each and every time I see one I get a little excited.  Even when something is described as having “western” as it’s narrative base, that’s pretty much enough for me.  I always jump on a new western title.  Black Jack Ketchum #1 was no different.

Working towards this review I thought a little about why that is, and I think I’ve got it figured now.  The reason is that when I was growing up, westerns were the only films that I didn’t have to filter through my parents.  I remember watching old 70’s western films, all shoot outs and violence and dying men in the streets, busty women in the saloons, all of it.  And my parents were cool with it.  Take that same amount of violence and put it in a horror movie, no sir, go back to bed son.  But with westerns it was cool.

That diversionary trek into my past brings us today to Black Jack Ketchum #1, from Image Comics and written by Brian Schirmer.

Tom Ketchum is a man with an unfortunate face and an even more unfortunate name.  He has been tagged as the wanted man “Black Jack” Ketchum, and is now hunted by the Dusters, enforcers for the shadowy Judge and sentenced to hang.  But Tom is not just a rangy cowpoke.  He has a few tricks up his sleeve as well, including using the saloons for travel (sort of a western, Tardis wormhole kind of thing) and a revolver that he talks to, which sometimes talks back.  He’s also assisted by a small, quiet girl with a rifle and deadly aim.

I love the way Schirmer has built up a world without the need for explanation right away, that Tom is talking to his pistol and there is no expository statement or panels.  The Judge and the Dusters are great villains and have their own powers to draw on.  This is a sci-fi western without spaceships (yet), and is in the vein of those classic westerns that I was allowed to watch. 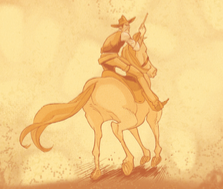 Claudia Balboni (Star Trek, True Blood) has a sleek style with very clean lines.  Most of the story takes place at night, so it’s pretty dark color wise throughout, but I’m excited to see where some of the brighter panels could go given room.  This one I especially liked the coloring in, and as it was set on a page with some darker panels was a great contrast.  Balboni’s character designs are great as well, making the Dusters weirdly menacing.

I’ll always read a western.  That’s for sure.  But with Brian Schirmer and Claudia Balboni creating new and interesting changes to the genre, smashing up True Grit and Dr. Who, I’ll keep reading Black Jack Ketchum as well.