Greetings True Believers and welcome to this special report on the state of the All New All Different Marvel Universe or as I lovingly refer to it, A.N.A.D.U. Things have definitely picked up speed story-wise as many of the debut titles are now into their second issues and already some of these titles are proving their worth while others performances have been lackluster at best. Normally two issues wouldn’t be my cut-off point for a slow starting series but in the era of the $3.99 cover price I have become a bit quicker when it comes to swinging that scythe and separating the chaff from the wheat. I am happy to report, however that the gems outnumber the duds significantly; having said that, let’s start with one of the brightest gems in Marvel’s A.N.A.D.U, Doctor Strange by Jason Aaron and Chris Bachalo.

Jason Aaron is a master of character building; his narratives are full of dynamic characters, many times larger than life with egos equally proportioned. Aaron creates the kind of characters found in Shakespearean epics or biblical sagas; whether its murderous high school football obsessed hillbillies in Southern Bastards or the Sorcerer Supreme himself Stephan Strange, Aaron’s strong suit is character development. In this All New All Different Doctor Strange Aaron doesn’t so much re-imagine the doctor as he brings him into the current landscape. All of the usual Doctor Strange tropes are present they are just not used as heavy handedly as we have seen many times in previous series. The dialogue goes a long way in making this version of the good doctor far more relevant than his predecessors. Aaron writes a great deal of these first two issues with tongue firmly in cheek thus there is a sense of humor at work here that is not often used by former writers who have worked on the character.

Bachalo brings his trademark brand of kinetic energy to the whole affair filling page after page with slithering manifestations from the darkest corners of the human mind. His take on Strange is a bit less Mephistophelian and more gentleman of leisure; Bachalo’s character designs tend to be somewhat stylized opting for exaggerated body language over more realistic anatomy which works incredibly well in this case. Overall this title stands head and shoulders above all the A.N.A.D.U debuts and in my opinion has the most potential to become a long running series.

Another debut that has all makings of a sure fire hit is Extraordinary X-Men written by Jeff Lemire with art by Humberto Ramos. Lemire very shrewdly captures that quirky 90’s feel right down to the subtle nuances in dialogue. There is an innocence beneath the audacious veneer that speaks to the child in all of us, a kind of vernacular that arouses the wonder that attracted us to comic books in the first place. As I read this book I could almost feel a tangible transformation into that wide-eyed kid that took his allowance to the local comic book shop and booked passage on journeys into mysterious worlds one issue at a time. Lemire starts the issue with the obligatory introductions and roll call of the current team roster however things get started fairly quickly as the mutant collective gathers to combat the threat of extinction this time via the spreading menace of the Inhuman-creating Terrigen Mist. Although extinction is certainly familiar terrain for the X-Men, Lemire seems to be having a blast navigating this team through the perils presented by this particular hazard. Storm does a solid albeit somewhat stoic turn as leader of the team; Colossus, Magick, Nightcrawler and Jean Grey round out the squad, that is until the big reveal which is pretty much spoiled by the cover.

Ramos’ art perfectly complements Lemire’s narrative with flowing, eye popping panels. His pencils are as visually appealing as ever with his trademark stylized character designs, however this time out there is an emotive element to his work that has not been seen before.

This is a strong if familiar feeling first issue from Lemire and company. The writing is solid particularly the character building but much of the issue understandable deals with set up and introduction of the new team. Ramos’ stellar art is the star of this debut issue, however there is obviously an extreme amount of potential for the X-Men book to become extraordinary.

The other stand-out debuts were Mark Waid’s All New All Different Avengers and Tom King’s innovative Vision series. Both of these titles feature extremely strong writing by two of the best in the business; Waid, a seasoned veteran and brilliant storyteller and King one of the brightest rising stars on the comic book horizon. The Avengers, like the Extraordinary X-Men spends the majority of the first issue dealing with introducing a brand new roster; however Waid seems to acknowledge the uncertainty of this Avengers lineup from the opening of the story as Sam Wilson points to the absence of any definitive Avengers squad. Waid also joins the Marvel PC Police, albeit to a far less extent than the likes of Spencer and Bendis, as he uses a group of right leaning onlookers to slander the ANAD Avengers team which is comprised with a decidedly diverse group. I certainly find myself somewhat left of center on most issues but comic books are my escape from the CNN and Fox Newses of the world; Bendis and company are becoming thought police taking the leftist view into the realm of the radical. I am all about diversity in comic books from creators to characters but don’t beat us over the head with it, I will now step down from my soapbox.

Moving deeper into the first issue Waid relies on some pretty standard foundation building elements setting the post-Secret Wars stage for some bigger stories to come. One thing Waid does better than most is include threads that tie many of the current ANAD titles together, this increases the cohesive feel of these books by leaps and bounds and really sets up a “universal” sensibility. The only real problem I had with the debut offering is the brevity of the opening story; due to the inclusion of a second, “back-up” story Waid’s main narrative feels somewhat rushed. Having said that, the second story is extremely well written focusing on Sam Alexander, the Nova of the new team and Kamala Khan, the young Muslim girl current carrying the mantle of MS Marvel; I love both of these characters almost as much as their respective predecessors, so the inclusion of a story dealing with the awkwardness of young attraction involving these two is a can’t miss proposition for me. Waid handles the characterizations with absolute perfection and since the plot is completely character driven his skill as a dramatic storyteller really shines.

Visually, Adam Kubert and Mahmud Asrar pack a substantial one-two punch in this issue. Kubert kills in the main feature with crisp, clean pencils and brilliant use of panels and page design. He is equally impressive handling the few big action sequences as in the smaller more subtle moments. His character designs are expressive and extremely detailed enhancing the drama and humanity of Waid’s poignant script. Asrar is spot on with the quirky facial expressions and thoughtful contemplation used to render the interaction between Sam and Kamala. This works so well to enhance and maintain the tension in the second story.

ANAD Avengers starts out with pretty standard steps resulting in a solid foundation however, in the hands of a consummate professional like Waid; the story is also charming and engrossing. The decision to split the debut issue into two parts pays off more for the character-driven second feature than the denser main story, but all things considered this approach seems to deliver particularly in light of Waid’s obvious grasp of the characters and their environment. I am certain that this book is going to be one of the stars in Marvel’s ANADU and I will be here at least as long as Mr. Waid is at the helm.

On a smaller scale, the other bright spot on this week’s Marvel horizon is The Vision by Tom King and Gabriel Hernandez. This book was one of those greatly anticipated by me and several of my fellow Marvelites. The premise is equal parts X-Files and Twilight Zone as The Vision attempts to have a family and live in Arlington Virginia in a Norman Rockwellian home complete with picket fence and precisely manicured lawn. They meet their neighbors Nora and George and the synthoid children attempt to integrate with their local school-aged counterparts, however the air of impending doom seems to permeate the entire endeavor. Their home is full of other-worldly brick-a-brack which attract the attention of Nora and George and add to the eerie atmosphere of the narrative. King does a fantastic job writing the quirky dialogue and scripting the off-kilter banter. The action kicks up several notches when Grim Reaper shows up to spoil the proverbial dinner party.

The Vision #1 is an absolute joy, its entertaining and engrossing with it X-Men via X-Files approach. It brings John Waters to suburbia and throws in an old school Marvel villain for sheer nastiness. If you didn’t grab this one please do yourself a favor and rectify that mistake. 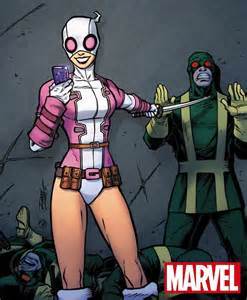 The major disappointment this week, in my humble opinion, was one that could be seen a mile off; I am speaking of course of the introduction of the mash-up, cash-grab known as Gwen-Pool. This “character” has no purpose, foundation or origin other than to cash in on two of Marvel’s biggest attractions, Deadpool and Spider-Gwen. Now let me say I read Deadpool and Spider-Gwen and enjoy both characters immensely, my problem with Gwen-Pool is that she is nothing more than a gag that grew legs and is now running to the bank. Her first actual story is the back-up feature in the new Howard the Duck debut, which is not bad but I digress. Gwen-Pool shows no potential to be anything more than a device to sell t-shirts, action figures and variant covers; at no point will this “character” be driving anything resembling any interesting arc let alone a series. All negative ranting aside, as a gag she works fine and as an occasional variant cover subject she works fine as well but please for Odin’s sake please cancel all this Gwen-Pool madness before it gets out of hand.

Well True Believers that brings this current foray into ANADU to a close I hope you enjoyed reading this as much as I enjoyed bringing to you. Please stay tuned for all the Marvel news that’s fit to print or post, I guess would be the case here and I will see you next time. Excelsior!

Shawn is an aspiring writer/artist who has been reading, collecting, and living comic books for over 30 years.  He lives in Baltimore with his wife, their son, lots of cats, dogs and other finned and furry friends.