Artists - various
I’m only vaguely aware of the Uncle Grandpa and Pizza Steve characters. I’ve seen them around and can recognize them, but have not watched the show. They basically seem to fit in well with the current crop of cartoon network animated series - Adventure Time, Regular Show, Bravest Warriors etc. All those properties seem fresh and interesting to me, mostly for their character designs and the look and feel. I’ve been enjoying what I’ve seen of the comics based on these properties. They all seem to have a natural exuberance, and a kind of postmodern, absurdist humor. A lot of the humor seems based on wacky, surreal, absurd situations, and catch phrases. I could see that getting old, but the natural spunk and the quirky attractive art helps to keep it grounded. The cartoons I grew up watching were a lot more “serious,” so this crop of shows seems very wacky to me. I think this generation of creators attack the creation of these shows in a different way. The love for the characters and source material shines through always. There is a certain lack of irony and an innate positivity that seems to exemplify these properties. 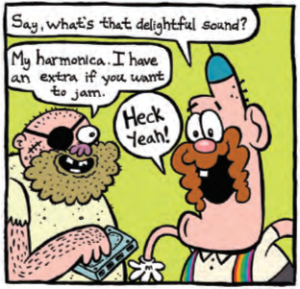 So when you have a comic based on one of those shows, featuring a talking pizza slice named “Pizza Steve” and all the other Uncle Grandpa characters, it seems to be coming from a very weird place. In short, I liked all the stories in this issue. All the strengths I listed above seem to follow Pizza Steve into his comic special. There were 10 separate stories present here, along with some extra games and puzzles in the back. All the stories delivered the Pizza Steve experience, the exuberant weirdness laden with catch phrases and goofiness. They are all fun stories, with provocative art. Having 10 different takes on a group of characters gives you some visual variety, and this comic was nice to flip through for that reason alone. 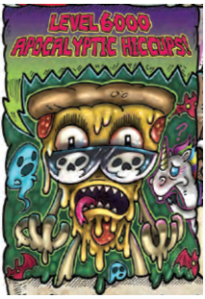 None of the stories in and of themselves were mind blowingly awesome, but it’s just a nice, funny, fun to read comic. Too many comics are getting too serious in my opinion, and a comic like this about a talking slice of pizza that gets into absurdist adventures is a good balm for that. The art that is present under this cover is also some top notch stuff. Probably too much to list here, but in general I was treated to a visual display of wild gestures, rubbery and fluid characters and bright vivid colors. Like I said, pure fun. You aren’t going to learn any lessons reading this comic, or have any deep insights, but you might have some chuckles and get lost along with these wacked out characters.