Colorist: Trillian Gunn
I’ve reviewed a couple previous issues of Help Us! Great Warrior for this site, and I feel that the quality is consistent throughout the series. having only read half of the six issues, and out of order, I am curious to see how the whole series reads as a whole. The pieces I’ve seen are great. Flores can write and draw, and Gunn’s colors seems to bring the art to the next level. The ability of Gunn’s to make the colors seem painterly and cartoony at the same time mirrors Flores’ ability to make the story and art at both times extremely cute, but ominous and dark at the appropriate times. 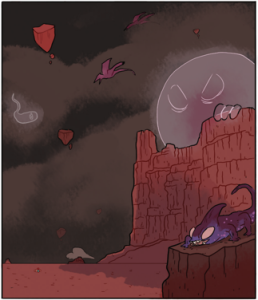 This issue flew by. To me, it wasn’t paced like a comic is usually paced. I’m guessing that is due to it being the last of 6 issues, so it’s climactic from page one. This issue was great, and had a satisfying conclusion, but to me it felt like it happened at breakneck speed. I’m guessing that the story taken as a whole, that wouldn’t be true. I’m also slightly confused. I think this is the last issue (6), but online I see a lot of mentions of it being an 8 part series, so at some point that must’ve changed. Either way, it’s not nearly enough of the Great Warrior. 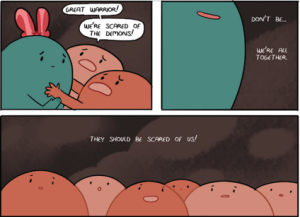 I’ll be watching for both Flores and Gunn in the future, no matter what projects they are part of. For me, the work on this book has made them both creators to watch for. The character of the Great Warrior is a wonderful one that I would love to see more of. I’m not sure where the character will go from here, if anywhere. I really don’t know, all I know is that I’ve fallen for the charming, blobby little warrior. I think you will too if you give it a chance. For now I think I need to go and catch up on the archives of the web series.