Artists - various
So, IDW is the new current home of the Disney comics reprint venture. For those not aware, Disney comics have been around for the larger part of a century, and in a few dozen countries. This has made it so that there is an immense backlog of material from other countries that can be reprinted with updated translation (did Donald Duck just make a Fight Club reference?) new colors, new lettering and packaged for a new audience.

Since for the larger part, the characters are on model and the characters themselves are ambiguously portrayed, this situation leaves the average duck fan with a lot of material for consumption. By ambiguously portrayed, I mean that across the board Donald, Scrooge and the nephews take on different personalities to serve the story best. They also sometimes win, sometimes lose, and sometimes go up against each other. The variety in tone of the different adventures is pretty wide as well. In one story, they might be arguing over annoying a neighbor with noise from practicing their brass instruments. In another, they are solving a mystery, or traveling to a far-flung island for a spy hero adventure, complete with a mad scientist villain. 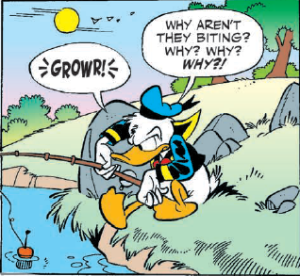 This variety in story type, characterization and art and writing are a major strength of reading this kind of book. It’s also a weakness if you happen to get a string of lackluster stories side by side. Given that scenario, I often start thinking more about the decisions behind which stories to present and in which order. I also key into things like the aforementioned Fight Club reference (in a story published in Italy in the 70’s no less) or updates in lettering, sound effects and coloring. I noticed a sound effect of a creature eating was “Nom nom nom” which, I’m pretty sure wasn’t what they would use in the 70’s in Italy.

So what you end up with is a curated, updated, translated representation of classic stories from other countries featuring characters that you are familiar with that may or may not be acting like how you remember, or they may be acting totally opposite. Oh yeah, and the stories range from things like taking the garbage out, to saving an independent newspaper media outlet from being bought out be a media conglomerate run by Scrooge McDuck.

I read Donald Duck #2 and #3, and enjoyed both books quite a bit. Most of the above examples came from these two issues; taking the garbage out, the spy story, the news media story, the noisy neighbor, etc. Having characters that can shoulder larger adventure stories and then a page later be thwarted by an angry landlord is pretty unique. So, you end up having a mix of those kinds of stories in one book, which is pretty great. After reading a high adventure world-spanning story, it’s nice to have a one off gag as a palette cleanser.

I’m not going to go over all the stuff in these two issues (approximately 90 pages together), especially after prattling on so long about what the repackaged Disney comics reading experience is like. I do want to discuss the high point of these two issues. The art from “The Siege of Nothing Atoll” reprinted from Italian Topolino 1050 (1976) - WRITER Giorgio Pezzin and ARTIST Giorgio Cavazzano. This story was found in Donald Duck #3. It was spectacular. Cavazzano is not a familiar name to me, even though I have read my fair share of Disney reprints. The story of “The Siege of Nothing Atoll” was a high adventure comedy buddy story starring Donald Duck and Fethry Duck. The story itself was entertaining and far-fetched. It was also a longer piece, able to fill a whole issue by itself, even without the joke stories that followed it. The art though, wow. Cavazzano brought a new feel and a frenetic energy to the art. It was masterfully done. One panel of Scrooge looking through a window in the rain made me stop cold just to marvel at it. 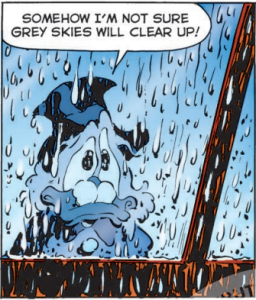 Something about the line weight of his inking just pushes this story from a normal Disney comic to something more. The way the characters act and pose is great as well, fluid, rubbery and always clear in their movements. The backgrounds, and environments were lushly illustrated as well. This story also contained an almost full-page illustration of a mushroom cloud that used the sound effect “ka-blooey” which made me laugh out loud. 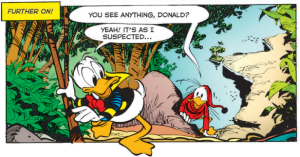 Basically, I want more of Giorgio Cavazzano. Whether he’ll be featured in future issues of Donald Duck, who knows? The grab bag style of Disney reprints makes that impossible to predict. But then again, who’s to say whoever is featured in the next issue won’t be even better, or just as skilled but in a different way? Only time will tell. If you are a fan of these characters (like me) or someone who likes light hearted and fun to read comics (like me) or if you like to have a variety of writing and drawing styles under one cover (like me) then checking out these classic reprints from foreign comics featuring Donald and Co. is a no-brainer. Just be aware that results vary, which is a good thing.