Jem and the Holograms became a glamour rock sensation that dazzled my childhood with fashion, drama and musical delights.

With the high expectations of loyal Jem fans (like myself), this project could not have been easy to tackle. I can’t even imagine the overwhelming task that lay before both Kelly Thompson and Sophie Campbell.

How did they do? Well, I’ll break down my review for you into three parts: the art, writing and my thoughts overall.

First, the art for this series is nothing short from stellar. The only thing that artistically bugs me is the hand drawn font used during any songs. Sometimes, it can be a little too loose and hard to decipher—but really that’s nitpicking on my part. Overall, Campbell has a talent for keeping that colorful style and fashion fans expect from a Jem title. The Misfits specifically have a fierce look in this issue that I can’t help but love. 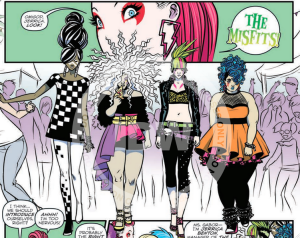 The writing only proves that Thompson and Campbell make a great team. After all, in this issue we finally see the Jems and Misfits meet for the first time and what ensues is comical, colorful and just pure fun.

So let me give you my overall thoughts, and as a longtime fan—I’ll try to keep it brief.

I have to say that this series has been a pretty good read so far.

Issue #5 picks up from the previous cliffhanger and as expected, the Misfit’s plan to ruin the Jem’s show backfires. The result was a little predictable, with Aja getting injured and back on her feet within the same issue, but I’m not complaining. I expect that from this series, and would be a little disappointed if the Misfits plan didn’t backfire on them or if the issue didn’t end in a food fight.

The only problem I’ve had with this series that continued in issue #5 is this:

For a comic titled “Jem and the Holograms” I expected a whole lot more…well Jem. Jerrica unfortunately, as a character, seems to continually fade to the background.

Now, don’t get me wrong, the other members of the band are important too—and the romance between Kimber and Stormer has that classic star-crossed quality. However, there are moments where it juggles too much back and forth between their romance and Jerrica’s with Rio.

I’m not saying that either one is unnecessary but the pacing between each Jem member starting their relationship with their significant other felt, in my opinion, a little rushed.

I’m unsure if this was due to the nature of this story being retained to six issues—but if that were the case, I would have preferred to have either one love story developed slowly or taken out entirely, allowing the focus instead be on the sisterhood between the band members.

After all, if we are modernizing this story and changing things, we have the potential to make a female centered comic book series with more to offer than the swift romances expected from its predecessor. Having a boyfriend or girlfriend isn’t the important message anymore…and that is all I’ve seen really be at stake so far for our protagonists.

In the end, I am excited to continue reading because they have more or less successfully modernized this iconic series—which is no easy task. I applaud both Thompson and Campbell and will look forward to future issues. 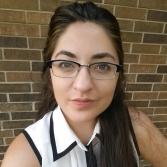 Miss V is a passionate nerd who obsesses over comics, video games and animation. She also does her own art, which she posts to her social channels listed below: