Adapted from the novel by: Richard Matheson
“The Shrinking Man” is an adaptation of a novel by the same name. I haven’t read the novel, but the comic is strong. The first issue set up the situation of the shrinking man, Scott. He is shrinking a the rate of 1/7th of an inch every day. This is uncontrollable and not understood by the top doctors that have examined him. This type of old school sci fi premise is pretty intriguing. The story bounces back in forth from the beginning of the story and the path he goes down after finding out about his condition, and a time period, many days later where he is 5/7ths of an inch tall. Doing the math, he only has 5 or 6 days left. What happens when he gets down to 0 is not known. Does he just disappear? It’s a fairly strange idea, and one that has a lot of inherent drama built in. There is the human drama between him and his wife, and then there are the perils of being so small that a spider can eat you.

This means that between the two narratives, three things are in flux, time, scale, and type of drama. The (almost) full sized man in the past that is having worries about his health and his family life has one set of circumstances. The other guy, the 5/7ths of an inch tall guy has to worry about feeding himself and getting drinking water while stuck in a basement with a spider. His concerns about family and all that are behind him as he fights for survival, and against the impending deadline of shrinking to nothing. The smaller man is the stronger one in that the full sized guy is very worried and upset, and the little guy has a steely sense of determination and grit. That idea of the man’s physical body shrinking, but his personality and his will power growing at the same time is great. 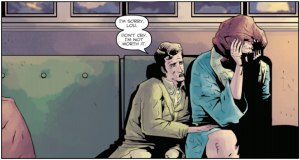 The writing and art are both well done. and in a supplemental section in the end, they discuss the process of adapting the book. It seems like they are making great choices in adapting it very closely to the book yet exploiting what comics can do that prose cannot. I suspect that fans of the book will be happy with the adaptation here. It’s a good read either way. Not sure how many issues this will run for, but I’m locked in for the duration at this point. highly recommended.