There is no disputing the fact that Carol Danvers has one heck of a loyal following and that is in large part due to the amazing character work done by long time Captain Marvel writer Kelly Sue DeConnick. DeConnick herself boasts a diehard fan base that has kept Captain Marvel in print even when the sales were less than stellar. It is that kind of fan support that has made Captain Marvel and the Carol Corps one of the most eagerly awaited of the Secret Wars tie-ins. For this project DeConnick is joined by co-writer Kelly Thompson and the brilliant artist David Lopez. There is a kinetic energy that grabs you from the first panel of this issue and propels you through page after page of Top Gun inspired action, the film is even referenced at one point. 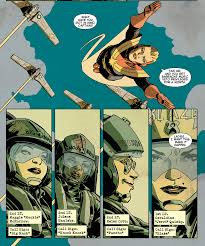 This issue contains all the elements we have come to love about the on-going Captain Marvel title but gives it a Secret Wars style revamping. For instance Carol now leads a squadron of hot shot lady pilots, each one her equal in resilience and bravery. The unit, known as the Banshees, is the first defense of the skies above Hala Field in Battleworld. The action certainly takes center stage in this opening chapter; however, it’s DeConnick and Thompson’s dialogue that really soars as high as the Banshees fighters in flight. The narrative is entertaining from start to finish, built on a solid foundation of adventure with an element of mystery thrown in to keep the up tempo pace all the more lively. It is quite clear that these writers are having a blast with the unrestrained freedom provided by the Secret Wars premise. This is just plain solid character driven storytelling at its best and most entertaining. The action is fun but it’s the characters that ultimately keep us engaged; with nicknames like Pancho, Knock Knock, Big Mack and Blaze it’s clear these ladies mean business and by the end of the first issue I was absolutely enthralled. 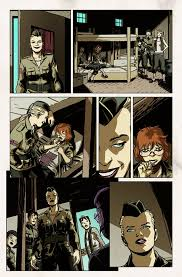 David Lopez does a phenomenal job of capturing that cinematic feel in the high-flying action sequences. His choice of dynamic perspectives add an air of danger and high tension that really turns up the intensity on these scenes. In a book full of female characters Lopez never once objectifies or exploits the gender of these extremely captivating characters, to do so would have been a great disservice, particularly in the light of such fantastic characterizations. Lopez’s handling of these ladies is respectful but more than that he knows that there is no need to portray Carol Danvers with outrageous cleavage or otherwise scantily clad because her strength comes from within. His design for Captain Marvel’s costume harkens back to a style of military uniform worn by the officers of WWII, a regal sensibility is apparent in the way he chose to render not just her uniform but the entire look of the book. This is some of the best visual work in the entire Secret Wars event thus far, Lopez never fails to impress me and this is some of his best work to date.

Captain Marvel and the Carol Corps is not just for fans of Captain Marvel, although they will definitely want to pick this one up, this book is for anyone who enjoys big action and high adventure in the vein of Indiana Jones or Top Gun. There is an air of larger than life excitement that runs through every panel of this book. I don’t think it is possible to read this issue without a huge smile on your face. So True Believers if fun is what you’re after this is the book for you. (5/5)