Let me begin by assuring anyone who hasn’t read the issue yet that I have done my absolute best to avoid any and all spoilers, so read on True Believers.

The final issue of this series is an enigma; it’s huge in impact yet Charles Soule manages to maintain a poignant sense of intimacy. There is no epic ninja battle perfectly posed and choreographed, twisting across a landscape strewn with destroyed pagodas and broken bodies skewered with katana and Samurai swords, neither is there any double page spread featuring gorgeously lavish scenes of Logan perched upon the headless smoldering remains of a Sentinel, towering above the wreckage of what was once a city also conspicuously absent from this final issue of Wolverine’s saga here on Earth is the appearance of any big named baddie the Marvel Universe has ever thrown at the clawed Cannuck, likewise there is no friend, X-Man or otherwise, to share Logan’s final moments on this mortal coil. Instead Soule gives us a heartfelt ode to a true hero.

In what is being called “the final” Wolverine story, Charles Soule takes the high road and provides Logan with a martyr’s exit minus any bombastic battles or self-aggrandizing soliloquies full of chest pounding lines about being “the best there is at what he does”. This is a more human side of Logan than we have seen in quite some time. He is hurt, wounded, lost, alone and he is feeling every second of that pain without his healing factor. This is an epic tale told on a small scale, stripped of all unnecessary accoutrement to reveal a heart-rending requiem far from the over the top super hero fare that often times surrounds the demise of a high profile character. Soule very wisely veers away from any re-telling of Wolverine’s past or regaling readers, most of who are extremely well versed in the history of this character, with storied exploits and lost loves. In fact the one instance where Logan’s past is cataloged is done in beautifully rendered panels by Steve McNiven depicting monumental eras in his extraordinary life. These are not bloody scenes of Wolverine with the Adamantium being sucked from his bones, or any such gory subject matter; they are quiet scenes like photographs in an album gathered in a pre-Facebook world, held in place by yellowing tape not uploaded to any chosen device other than the human memory. It is that kind of sentimentality that Soule has woven into the lush tapestry of this narrative to deepen the emotional element of the story and allow the readers to digest the event and the finality of it. Although let’s admit it finality is far from final when speaking in terms of a comic book death but that doesn’t negate the kind of emotional response felt by any real fan of Wolverine. The grieving we feel is an automatic reaction to experiencing the “death” of anyone we have come to identify as an important component of our lives, actual or fictional, it matters not when speaking of a friend. I believe that by toning down the action sequences and even the events leading to Logan’s death Charles Soule has allowed us to grieve for our friend.

Visually, there are very few who do it better than Steve McNiven. He has worked on big Wolverine stories before, collaborating with Mark Millar on the amazingly brilliant Old Man Logan arc McNiven brought us all the grandeur of the super hero epic on a sprawling scale. This time out the artist is just as brilliant but showcases another style in his storytelling repertoire. There are certainly several kinetically charged action scenes in this issue and McNiven does miss a chance to kill each and every one of them, however it is the range of emotion he extracts from the characters in this story that takes center stage and steals the show. His facial expressions are full of pain, physical and emotional in nature but there is a magnitude of other feelings represented in those feature as well; longing, anger and fear. This is heavy stuff make no mistake about that and McNiven brings his A game to squeeze every drop of emotion from these characters. He and Soule work in unison so well that Soule’s script is truly visible in every panel on every page of this book. Jay Leisten’s inks are subtle, always enhancing never obscuring the nuances of McNiven’s pencils, bringing another dimension to the work just as Justin Ponsor’s remarkable colors do. Ponsor is one of the best in the business, his clever use of highlights and shadows add an authenticity and realism to the entire work. This is a top notch creative team front to back.

Death of Wolverine, while certainly an event, has the feel of an intimate tale of a life that mattered and continues to matter as it literally forges the hero into a monument to heroism. Charles Soule does an amazing job of maintaining an emotionally charged narrative without ever losing any of the excitement that would normally be derived from action scenes. The smaller scale presents the drama bare bones and raw, every nerve exposed. This is great storytelling by Soule and McNiven who has once again created some of the most stunning pages to hit the racks in quite some time. Overall this is a modern classic that lives up to the hype and beyond. (5/5) 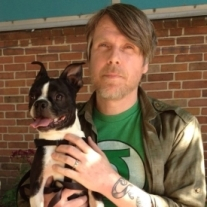