Are there more terrible things happening today, or are we more aware of each and every terrible thing because of the increasing connectedness of our society?  The news media is constantly flooding us with images of the latest disaster, and although that engages us as a culture, pushes large scale consciousness and therefore action when there may have previously been none, after days and days it tends to wear on your sense of what is important, on what is immediate.  It may seem silly to talk of comic books when there are atrocious things happening within the borders of our country, but while this is happening sometimes people need a break.  If it’s a couple of hours in front of a movie screen or ten minutes and twenty-two pages of glossy action, those are the breaks that help us recharge, perhaps even survive in the face of misery.

This lighthearted and upbeat intro is brought to you solely on my own, check that, re-set, and bring on the fun, for this week, there is no better way to escape than with Bandette #8. 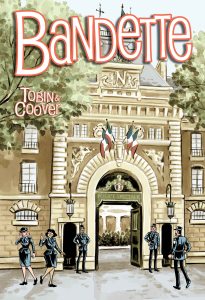 Paul Tobin (Marvel Adventures: Spider Man) has written a tale that is outside of the norm of mainstream comics.  Bandette is a title that has brought nothing light-heartedness each and every issue, and that is solely on the shoulders of the main character, the teen-aged thief in the title.  Bandette brings to comics something that I feel has been lost for a long time.  She has the fun quips of Spider-Man paired with a charming and often irascible innocence.  Think French Peter Pan.

Issue 8 furthers Bandette’s quest to be a pain in the arse to her nemesis, Absinthe, a rich crook and swindler of the highest caste.  She is James Bond to his Dr. No, or perhaps Pan to his Hook, and the more he rages against her the better she likes it.  Also included in this issue is the Strangler, a hired killer out to wrap his hands around Bandette’s svelte neck, and of course Inspector Belgique and Monsieur round out the cast.

Colleen Coover’s (X-Men First Class, Adventure Time: The Flip Side) art is perfect for the tone of the book, catching the wistfulness of Bandette’s character and the European feel to the story.  It seems to me that a different sort of art may portray Bandette in a darker sense, and with Coover’s light watercolors you feel like this is taking place in one of the street paintings on the edge of the Seine.  Each panel is filled with color and the forms move freely throughout, catching Bandette’s sprightly nature with just as much fervor as Tobin’s scripting.

Bandette is a light in the darkness.  When even comic books tend to be pulling a darker film over themselves, looking deeper into the psyches of already dark characters, Tobin and Coover bring joy back to comic books.  It’s fun to read Bandette, because you know that she will always triumph, always persevere even in the gravest of circumstances, and will do so with a candy bar in one hand and smile on her lips.  If you’ve not read it yet, jump aboard; Comixology has the issues for .99.  If you’re already immersed in the adult-sized ball-pit that is Bandette, than read #8 this week, and lose yourself for a bit.