A whole lot of something.

I have the upmost respect for Warren Ellis. The man has written some of the most highly regarded stories in modern comics. With The Authority, Transmetropolitan, and Planetary being the most notable standouts in a very stellar body of work. So you can imagine that before reading Trees #1, I couldn’t help but be exited.

Maybe it’s due to overabundance, but I am personally getting tired of the whole “first contact will surely be with an alien species that will be far superior to us and treat us like a resource” way of approaching extraterrestrial based sci-fi. I think this concept of how a more advance extraterrestrial race would see us, comes from a very human action. As our history proves, when a human civilization “discovers” another human civilization that it deems “inferior”, (mainly due to their different lifestyle, religion, technology, etc) the “superior” human civilization proceeds to think of ways it can exploit the native land and people to their own advantage. I won’t dwell too long on this issue, but I would just like to point out, that in such stories, we may very well be seeing the horrors WE might inflict when WE go out into the cosmos and discover other alien worlds and species that WE deem inferior to our own. As is a very human thing too do.

My thoughts on the human condition aside, lets talk about Trees #1 the comic book. The writing is solid, a standard post-apocalyptic narrative. We are introduced to the three characters that seem to be the series’ protagonists, a politician, an artist, and a scientist, who predictably all see the Trees’ involvement in their lives differently. The Trees, being the main plot device and title of the story, are visibly alien in nature. The story takes place ten years after first contact, wherein the Trees first landed and caused mass death and destruction. Trees #1 seems to be going in the right direction, be-it a dull one. Post-apocalyptic alien “where did they come from and why?” stories are all well and good, but Trees #1 seems to lack the inspiration and “WOW” factor that can get readers hooked on such a tale.

Jason Howard’s art is good, but feels out of place. Trees seems to be very serious science fiction, yet Jason Howard’s art is very “cartoony” (in a good way). I’ve always felt that a good sci-fi comic has to have art that is very detail oriented, especially if it’s post-apocalyptic. Jason Howard characters and settings simply don’t convey the solemn atmosphere and drastic change in how humans perceive their place in the universe that Trees seems to want to imply. The coloring choices in particular don’t make any sense at all in some panels. 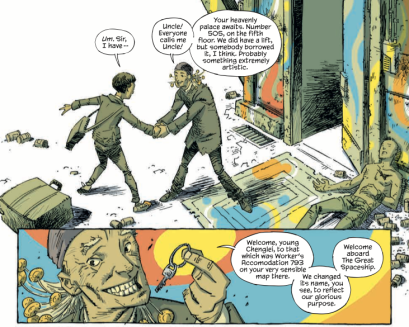 The Colors here are just… I don’t know how I’m supposed to be feeling about this.

I’m going to give it to you straight, Trees #1 has already lost me with its first issue. There’s just no reason to continue for me, although there may be one for you (probably not). Trees #1 is strictly a buy only for Warren Ellis fans, who I know believe that the next few issues will redeem what can only be described as a very dull first issue.