Walter Simonson is a member of that ultra-elite class of comic book creators that sadly gets smaller every year. He has brought his highly recognizable and unique visual style to the most iconic characters of both DC and Marvel at some point in his illustrious career. His work at DC includes groundbreaking runs on Detective, Manhunter and Metal Men; his time at Marvel included runs on X-Factor, The Fantastic Four and Thor, during which he created the enduring fan-favorite character Beta Ray Bill. Still working at Marvel today, Mr. Simonson has most recently been working on the Hulk. His extensive resume also includes work on several licensed properties for other publishers, most notably Star Wars, Alien, Battlestar Galactica and Robocop vs. Terminator. Mr. Simonson is as relevant and influential today as when he first captivated the minds of comic book readers in the 1970’s.

Star Slammers was first conceived by Walter Simonson during his college years and was later published by Marvel as a graphic novel in 1983 before becoming a mini-series in 1995 published by Malibu Comics’ Bravura imprint. Star Slammers are described by Mr. Simonson as “… a race of men who could out-shoot, out-fight and out-kill anybody. They were paid fabulous sums to act as mercenaries. The practice became so lucrative; they decided to go into business. They became the most successful businessmen in history and they called themselves, The Star Slammers!” Now under the IDW banner, The Star Slammers epic saga returns; written and beautifully illustrated by Walter Simonson and vividly colored by Len O’Grady based on the original colors by Walter and his wife and oft-times collaborator Louise Simonson. 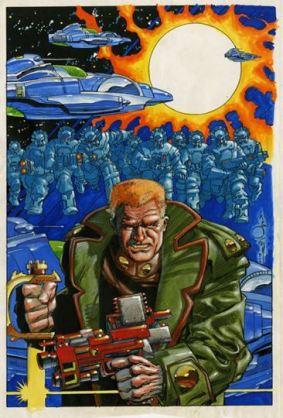 In this issue, the Hunters of Orion are desperately seeking revenge against the Star Slammers targeting their home world for a devastating planetwipe. The Orion Skumbarges arrive to deliver their deadly payload of lethal, but unfortunately named, Skumballs, which are a kind of space depth charge. The Star Slammers, as out-numbered and woefully under-equipped as they may have been still manage to rally a fighting force of antiquated star fighters, derelict warships and an unquenchable desire for victory. However, their only real hope of staving off the Orion onslaught rests in an abstract mind synthesis or mind bridge known as The Silvermind. Unfortunately, Ethon, the only Slammer capable of this all but forgotten practice is dead. Now Jalaia, who witnessed Ethon generate the mind bridge as he was dying, must attempt the extremely difficult feat to save The Star Slammers.

This is old school comic book fun full of big action sequences, an extremely intriguing premise full of sci-fi tropes, engaging, genuine characters and stunningly detailed artwork. Star Slammers truly harkens back to the very beginning of my love affair with comic books and like an old Peter Murphy song reminds me of just why I fell in love in the first place. Walter Simonson is a top notch creator whose contribution to this beloved medium is mind boggling and he obviously hasn’t finished yet. His dynamic and inventive approach to storytelling through sequential art is alive and vivacious; his pages are full of energy, the compositions inventive and original. There is an explosive sense of urgency to this story that is enhanced by the bombastic imagery created by Walter Simonson. 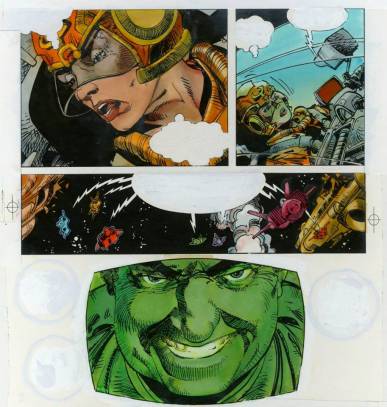 The characters are interesting and well written, each with a distinctive voice and personality. There is no lack of detail in the development of these characters and their motivations both as individuals and as part of this very unique team. The Star Slammers are like no other group in comic books in their mission and their motives.

I honestly love this book for so many reasons but most of all is the adherence to an almost forgotten ethic. This comic book exists because of the passion for storytelling Walter Simonson embodies. Any true comic book fan should be reading this book, it is mandatory. Star Slammers is a rare work made of the best elements comic books have to offer from age to age; it is a record of history that points to the future with a timeless sensibility and appreciation for the craft of creating great comic books. (5/5)