The penultimate issue of Forever Evil is certainly a big one.  It has big action, big violence and big reveals but does it have big heart? I’m not so sure about that. The obvious gripe most people are going to have about this issue is Geoff Johns’ rather unceremonious treatment of Dick Grayson. Johns seems to be kowtowing to the same sort of fans who clamored for Jason Todd’s death way back in issue #428 of Batman, in fact the only thing missing is an 800 number to phone in your vote for Grayson’s demise. Let me say that I have no problem with killing off big name characters if the story calls for it and the circumstances are right, however in this case it feels like the result of a murder pact between Dan Didio and Geoff Johns. This issue, like the entire series, is well paced; the action is relentless but Johns’ precise timing and storytelling expertise give the barrage of events enough breathing room to allow the narrative to progress without feeling rushed. The problems with the narrative are not with the mechanics but with the content and perhaps execution, no pun intended. Take for example the big reveal of the hooded captive’s identity which I won’t spoil here.  It ends up feeling somewhat anticlimactic.  It still packs enough of a punch albeit a diminished one but, this could have been a much more intense scene. This, in my opinion, is due to the substantial lack of consequences or any real emotional response to the events of this issue, in fact only Batman seems to be moved at all by Dick Grayson being strapped to this “Murder Machine” and the fact that a hero who has been a part of the DCU virtually since there has been a DCU is most likely not going to survive another issue. It smacks of pandering to a segment of alleged fans who want to see characters die for no other reason but to fuel a secondary market of unscrupulous speculators who will sell the death of Nightwing issue at inflated prices on eBay.

This issue is not all bad, not by a long shot; there are plenty of highlights to offset the few complaints I have with the content. For instance, Johns does a phenomenal job of fleshing out the relationship between Batman and Lex Luthor. The chemistry that is created by forcing these two larger than life personas together through extreme circumstances and a shared desire to defeat a common foe is a direct result of Johns’ brilliant writing. Having Batman come to grips with the choice between the lesser of two evils is an exploration of the depths of his commitment to the greater good and Johns use of extreme violence is indicative of just how far both sides will go to achieve their desired goal. In this case it is truly a question of the lesser of two evils because both sides are willing to employ brutality in pursuit of some perceived victory; one is in direct opposition of that evil and the other is in its ultimate triumph. Johns does some of his best exploration of character roles in this issue.  His casting of Luthor as a quasi-hero works exceedingly well here particularly as a foil to Batman’s messianic role as savior of the world. Johns also makes incredibly effective use of characters like Black Manta, Captain Cold and Bizarro and their willingness to step into the hero role if only temporarily to battle the Crime Syndicate. Captain Cold has one of this issue’s most memorable scenes, let’s just say he gets a leg up on a member of the Crime Syndicate in a big way, it’s a great scene.

David Finch’s meticulous attention to detail captures the brutality of the narrative in all its gruesome glory. His character designs have been extremely effective throughout this series and this is because of that precise level of detail he brings to every subtle nuance no matter how small; the tears in the battle tattered costumes, the weary facial expressions and lots and lots of blood. Finch excels at capturing the darker aspects of the DCU and he is at the top of his game here, he delivers some of his best work yet in this issue. I cannot wait to see what he has in store for us in the final chapter, rest assured there will be blood.

In the final analysis, Johns is able to pull this one out with a strong showing from the supporting cast and some stunning artwork by the always amazing David Finch. This wasn’t the best issue of the series but the few missteps are not catastrophic, certainly nothing a strong final issue cannot salvage. Overall this series has been really solid particularly when you take into account the kind of game changing events that Johns is dealing with. The face of the New 52 is going to be irreparably altered when Forever Evil is all said and done, that much is certain. The future of the DCU is going to be impacted more by this series than it has been by any other in quite some time but fortunately for us this creative team is more than up to the challenge. (4/5) 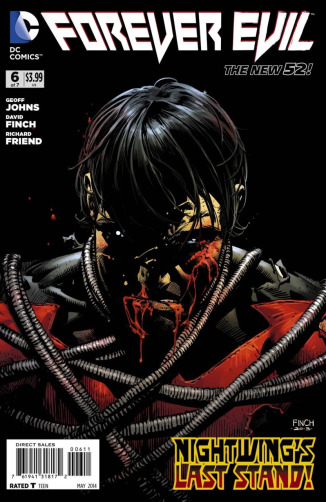