*Here there be Spoilers…so get over it.

I went through a period in my late teens and early twenties when I wanted to watch every single gangster movie I could get my hands on. I always knew that The Godfather was a great film, even before I saw it, but when I came to experience it I began to understand. This was right around 1997-1998. I binged the trilogy. Then watched Goodfellas. Donnie Brasco came out in 1997 and I devoured it. Casino, Reservoir Dogs, and The Professional all followed. (Think of the fuel I used in these copious trips to the video store.) Then I kind of bowed out. (A video store is a building where you would go to rent films, which they had lined up on shelves for all the world to see. It was glorious.) 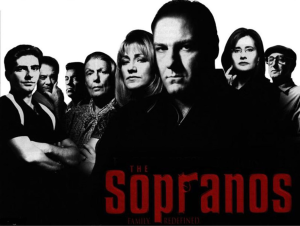 In 1999 The Sopranos debuted on HBO and ran for six seasons. I missed it completely. (Not that I had HBO at the time anyway.) By the time I was able to watch it, it was in the fourth or fifth season and I thought, “I can’t start now… there’s just too much.” So I didn’t.

Digital streaming has opened the door to binge. I watched The Sopranos over a couple of months on Amazon Prime. (Don’t know if the platform matters, but there it is.)

I heard the hype. Whenever I would mention that I hadn’t seen it, people would give me a look like I’d just said…”Mac and Cheese? So…there’s no tomato sauce then?” So when I began watching it I suspected that there would be some mob stuff, whacking and other shenanigans, families, all of the stuff I learned in my late 90’s binge.

I watched the first episode, and though it didn’t by far rank on the low end of the scale for me, it wasn’t at the top either. I thought it was ok. I didn’t really connect with Tony going to see his therapist, and thought it would get kind of schticky as the series went on.

Just a quick note here. This show was revved up and running during 9/11, and it was a strange time capsule to see how the writers handled that. There was a fear of the city, of any Middle Eastern people, and terrorists were an injected plot point. Though it really never came to much throughout the series, it was a call back to that time for me, and I thought the show handled it well.

As I progressed through Season 1 I really hooked on to the personal relationships that were being showcased. Between Tony and Junior, Tony and Chris, Tony and Carmella, it’s all about Tony really. The show becomes a profile of Tony Soprano as he interacts with the various people around him. Between his constant philandering, his murderous actions, his general low-down-not-niceness, you would think that he would come off in a bad light. But the show runners give him enough humanity, in little moments, which make him a sympathetic character. I found myself swayed towards his point of view, even when I didn’t agree with the action he took. In each season he has to deal with some kind of betrayal, to him, to the family (business or personal), and each time it’s played so that you can see his lack of choice. In the first season it was Big Pussy, then Ralph, Tony, Christopher, Junior as the show progressed…each of these people, like family and actually family in most cases, are those that are closest to him and those that pay the ultimate price due to “letting him down”. (Although Junior is one of the few Soprano Family members still alive at the end of the series, he has Alzheimer’s’.)

I could go through episodes and tell what I liked about them, but there are 86 of the buggers, and my fingers wouldn’t take it, nor would you read it. Suffice to say that the series weaves it’s way into your brain. By the end of Season 1 I was already mourning the loss of the series. (Almost in a Deadwood-ian fashion…but that’s for another article.)

I would be remiss if I didn’t mention the final episode, original airdate of June 10, 2007 and called Made In America. This was one fantastic hour of television, and even if the rest of the series was just so-so, it was worth it for this. The buildup in this season was incredible, with members of the family dropping, Tony in hiding, and the final betrayal when Dr. Melfi, the one person who has always tried to help him, has quit on him, believing that he cannot be helped through psychology. In the end, she does exactly what Tony has been doing since the first season, cutting him loose because he hasn’t shown any signs of change.

The show ends with the Soprano family in a diner, the door is opening and closing, Tony is half-watching people come in and leave, and a call-back to The Godfather when the camera follows a guy in a track suit past Tony’s table and down the hall to the bathroom. It’s been said in the show that this is Tony’s favorite scene, but also foreshadows an end for him. In the previous episode there was a callback to Tony and Bobby talking about how it feels to die, and the speculation is that you don’t feel anything, that everything just goes dark. The last shot of the show shows Tony, you hear the diner door open, and then the screen goes dark and silent. It was a shocking and fantastic end.

The Sopranos was completely worth the time. The writing and directing was top-notch, and the acting was superb. This one goes on the shelf as one of my favorite series of all time.