Greetings fellow citizens of Gotham, it’s a chilly and overcast October afternoon here in the city our brave and bold Dark Knight Detective calls home where we will be bringing this week’s installment of The Weekly Bat Signal to you. END_OF_DOCUMENT_TOKEN_TO_BE_REPLACED

The guys at 2ComicNerds have posted a review, looking back at the now infamous “Batman, Inc.” #8 - the death of Damian Wayne!  Check out what these two fellas have to say about one of the biggest events in DC Comics.  Don’t forget to check out their YouTube page at:  http://www.youtube.com/user/2ComicNerds?feature=g-user-c 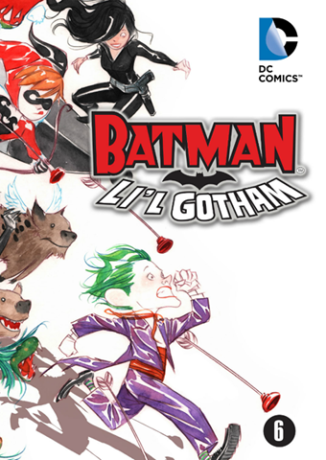 ‘Lil’ Gotham’ has been one of my favorite comics since launch, especially at the unbelievable price of 99 cents an issue, but I may be heavily biased due to the fact that I am one of the largest ‘Batman Freaks’ I know of.  Once I saw Dustin Nguyen’s beautiful Bat Family artwork surfacing, I instantly fell in love with its child-like humor and visual beauty.  It was amazing stuff - painted lightly but with a range of color that would go from near pastel to deep, rich tones.  While the character designs and look of the style were much like a children’s book, they were spot on, allowing it to be a weirdly perfect fit within the usually darker Batman universe.  The figures were strong, with such well placed hints of detail that you instantly knew which character you were looking at.  Upon seeing the release of the first installment of the digital only “Lil’ Gotham” series, I figured I had just found a new favorite comic.  And I was very happy to be correct in that assumption.

Since last year’s opening Halloween-themed issue they’ve released 5 more, all based on and released near certain Holidays.  I quickly found that the title was as genius and amazing I had hoped.  And maybe even better.  Written by Derek Fridolfs and Nguyen, so far we’ve seen stories for Thanksgiving, Christmas, New Years, and Valentine’s Day.  All of these have been incredibly fun reads, taking a classic innocent silliness and mixing it into hints of the darkly serious tone of the usual Batman title.  I was amazed (and still am) at how well it worked.

Today saw the release of issue #6, which revolves around the Chinese New Year, and is one of the most well written issues to date.  For me, this new issue is exactly what I needed after #5′s Valentine’s Day story, which I found to be too unoriginal of a concept and the weakest in the series so far.  This issue opens with Damien, frustrated that his Father (that Batman guy) is too busy with business matters to train with him.  Alfred takes him to Chinatown, where there are celebrations already going on, and assures Damien that he will be training, after all.  Arriving at one of the original schools Bruce had trained at years prior, they are greeted and Damien finds Katana waiting there to train, as well.  Upon learning of a sacred blade that was recently stolen from the school, the training turns to a mission to find it.  This also cues Alfred to tell a story of his and Bruce’s past, in the first days of Batman.  This flashback is painted in black, white, and greys, all the while still as vibrant and perfectly shaded as the color work.  This flash has many great moments, including a very bitter-sweet nod to the ‘Flying Graysons’.  And that’s the kind of series this is - it will make you laugh out loud, you will marvel at how wonderfully charismatic the artwork is, and - for the Batman fans in the crowd - you’ll get plenty of canon references and other things that have always made it such a treat to be a fan of the Batman Family.  Expect to fall in love with these different but all too familiar versions of beloved characters, and - most of all - expect to fall in love with this title.  Even if you’re not the biggest Bats fan or even one at all, this series has all the humor, artistic quality, and great stories that should ‘seal the deal’ for just about any interested comic fan.  Brilliant, genius, and damn near perfect.