Summary: “From a dying planet shall come the children of light…”

While on vacation on a small island, young Shiina Tamai dives under the water near an old shrine and discovers an unearthly starfish-like creature. She nearly drowns but is rescued by the silent, wide-eyed little animal, who Shiina befriends and names Hoshimaru.

To Shiina’s surprise and delight, the creature changes shape, lets Shiina stand on him, and the two fly off into the clouds. But what looks to be a young girl’s ultimate fantasy soon takes a darker turn as Shiina and Hoshimaru become entangled in a struggle between rival extraterrestrial factions who battle in the skies upon huge alien beasts called Shadow Dragons, with the fate of Earth hanging in the balance. [Dark Horse]

Review: There was a time in the 80s, 90s and especially the early 00s when a multitude of manga and anime were allowed to be experimental and use their narrative to unconventionally discuss a multitude of ethereal topics. Like life, death and what it means to be human. As much as I was raised on series like Pokemon, Digimon and Cardcaptor Sakura which dealt more with the kiddy side of storytelling I was also raised on series like Neon Genesis Evangelion, Serial Experiments Lain and Ghost in the Shell that pushed the limits of what could be tackled in a medium in a cerebral and mature manner.

Shadow Star – having been first published in 1998 – fits right at home with those latter stories from how it goes about telling its mature narrative right down to the art style which in some strange manner makes me feel nostalgic even though this is my first time ever experiencing it. Everything feels familiar and yet not at the same time and that leads to a fun experience for me when reading it.

The first volume covers the first 5 chapters and all of them are pretty long in page count but pretty quick to read in their dialogue. I was able to get through this in no time and there was no dull moment. Shiina, the main character is a simple yet rambunctious little girl with a lot of energy who seems to always be in the need of doing something.

When visiting her grandparents on the country island they live she almost drowns while swimming. She’s saved by a creature that it’s in the shape of a star and immediately binds to her to become her partner. Which essentially just allows her to ride on it. The creature as of right now is still without a proper name, but that just adds to its mystery. What Shiina does decide to call it is Hoshimaru. 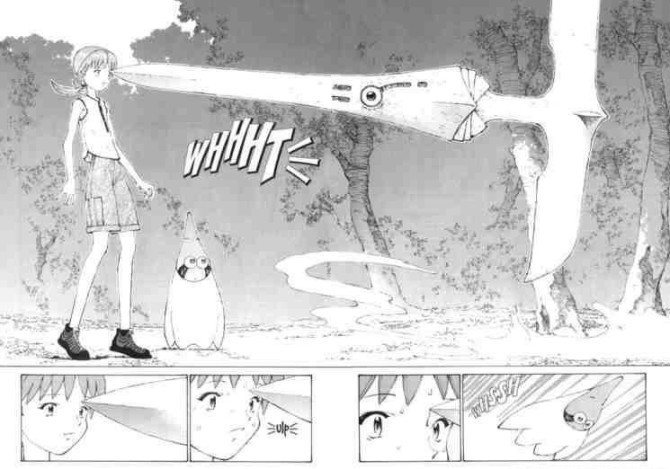 This creature opens up a whole world for Shiina as she comes to learn that there are other people in this world that have similar creatures as Hoshimaru. In a later chapter she meets a girl named Akira who seems to come from some form of an abusive family is also bound to a star like creature, whom someone eventually calls out as a dragon child.

Though Akira and Shiina both embrace their “dragon children” in very different ways the mystery of these creatures continue to grow with the introduction of “dragons” and humans who have partnered up with stronger, more deadlier versions of Hoshimaru. And there is definitely fighting between them within the first volume as the book actually opens with a “dragon” - I use quotations because they look nothing like dragons – taking out a few jet fighters and then later we see them again once they begin hunting down Shiina and Hoshimaru.

Though there is death and destruction on small levels towards the beginning to give the series, and Shiina, and a bit of innocence in all this, it’s with the introduction of Akira that the series starts dabbling in heavier material because Akira’s broken mind and family life leads her to cut herself with a razor just to feel better. It’s something only us readers and Akira knows about currently but is bound to come into play again later. How heavy this series will get as we get further into it? I have no idea but knowing these types of stories I look for it to get pretty heavy.

I love all the character designs and the action is intense and breathless as you never know who’s actually going to live or die by the end of the fight. Even Shiina never feels truly vulnerable as the main character as she comes out of her first few scraps just barely unscathed. In fact the volume ends with her in a battle with one of these “dragon owners” and I’m incredibly excited to see where it goes.

If I could say one bad thing about this volume it’s that the drowning portion of the story early on is glossed over pretty quickly and not handled in the more serious manner I expect this series to have, and the last page of the volume sees Shiina essentially saying she’ll never give up in a fight and continue to be reckless because it’s just who she is. Which is a shounen action trope for main characters and I don’t want this series to fall into anything like that.

Shadow Star is a series I look forward to reading with much fervor and excitement. It has my nostaliga levels on high and it’s pretty good to boot.

Final Score: 4.5 Dragon Children out of 5