Story and Art by Keito Koume

Summary: A girl stumbles upon and accidentally awakens a robot that has been asleep for 15 years. [MyAnimeList.net]

Review: The Ocean Meets the Sky is a fantastical little one-shot that isn’t very long but manages to pack quite the punch in its 30-odd pages of story. It focuses on Tanako Umi, a 15-year old girl who discovers a robot that also looks like a 15 year old girl and has been hidden away in a school and asleep for the last 15 years.

The two bond and form a deep friendship over the course of this story as we see Tanako go from being a girl with very little knowledge of science and engineering to learning exactly what is needed to take care of the robot and keep her alive.

After finding a notebook that has been packed away called “Sora-Notes” Tanako takes to calling the robot Sora, and from then on we have a name. Sora can only do so much. She has a sort of artificial intelligence, but she cannot walk because most of the power being converted to her brain cannot be converted to her legs or she will essentially die.

Of course there’s probably a way to sidestep this but Tanako would need to get a hold of Sora’s creator who knows their way through Sora’s body in-and-out. The only lead Tanako has to go on however is that Sora’s creator graduated from the school 15 years prior to this story.

So we get a lot of great moments throughout the story as we see the two girls bonding and creating a deep relationship for one another. Probably not one of romantic love, but definitely of a deep friendship. We even find out that Sora’s dream is essentially to go to the beach and see where the ocean meets the sky, thus the title.

There’s a little bit of nudity in this story, but it’s very tasteful and makes perfect sense in the context the story. I only bring this up because you see Sora’s breasts during the time that Tanako is taking care of her and mending parts of her body during that montage I was talking about. 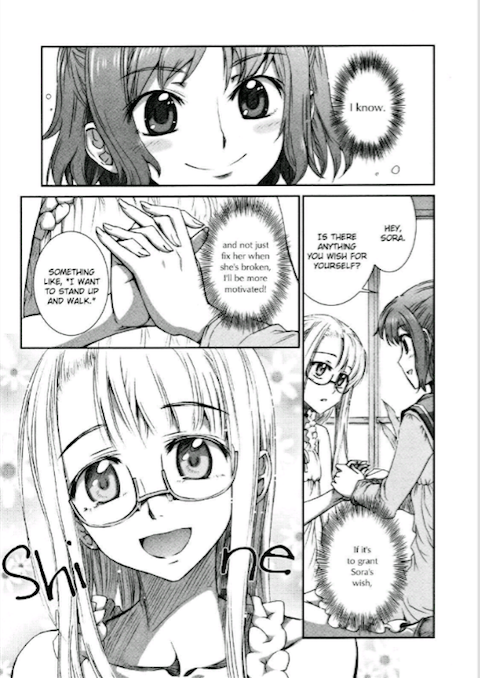 Later, near the the end of the story Tanako finally meets Sora’s maker after getting a hold of her. This is the most dramatic part of the story and is still told in a mature and tasteful manner. We find out that Sora is the name of the creator, not the robot. The robot was never given a name and the creator never cared enough to try and find a way to give function to the robot’s legs.

The robot was made in the image of her creator, however, so both Sora’s look exactly alike. The two never meet in these pages however, as Sora the creator decides to leave the robot in the hands of Tanako from this point on. And Tanako never lets slip that she met with Sora’s creator, choosing instead to move on and become the best caregiver and friend she can be.

The story ends bitter-sweetly as Tanako sets up a photo shoot for Sora and puts her in a bathing suit with the backdrop of the ocean behind her so that Sora may get the feeling of being at the each without actually getting to go. It’s bitter sweet because it shows that Tanako was never able to give Sora the ability to walk so that they may one day go to the ocean, but she cares so much for her friend that she wants to at least give her the sense of being there.

The Ocean Meets the Sky is a a very nice little story that I can easily recommend everyone to read and I implore everyone seek out to read. And I haven’t even discussed the art yet which is incredible to look at and has a great, soft aesthetic to it. I loved the art in this story.

Final Score: 5 Female Automatons out of 5