Chief Brody started to dig into the guts and blood with his scoop. Cigarette dangling, he hurled the soupy gook into the salty water. “Come on down and chum some of this (awkwardly dubbed) stuff.” (Thanks TBS)

Cue mechanical shark. Brody lurches up wide eyed, and shows off his uncanny ability to keep his cigarette dangling from his mouth.  “You’re gonna need a bigger boat.”

When I was a kid, Jaws had me fascinated with this magical chum that lured in sharks. A few decades later my fascination with Chum has reemerged. This time instead of shark bate, it comes in the form of ComixTribe’s three part mini-series by writer Ryan K. Lindsay (Negative Space) and artist Sami Kivela (Hit List).

Issue 1 was a fantastic look at a self dubbed, “surf-noir”, and issue 2 continues to chug down the the train tracks at a breakneck pace with the brash sex-driven blood lust we got from the first issue. 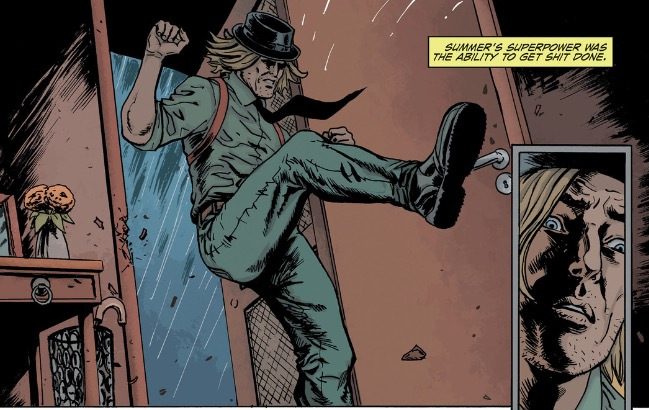 The thing I felt I needed from issue 2, after reading issue 1, was a little more of Standard, the detective and ex of our anti-heroine, Summer.

Ask and ye shall receive. Standard is brought to the forefront in this issue, and it is done extremely well. It naturally flows with the story, and adds to the glimpsed depth of Chum that could have easily been overlooked.

This has been Lindsay’s strength through-out this mini-series…controlled world building. The flashes of a deeper story that brings texture to Chum without being patronizing to the reader, while still giving us the “wtf” moments.

Issue 2 begins with Summer making plans to escape the island after she has stolen the bag of drugs and money, and seemingly tied up all of the loose ends. But as most good stories go, there is a hitch in the plan. This throws Summer into a tailspin, and we get to see her with her back against the wall. Warning: The claws come out.

One of the exciting things I got from Chum 2 was a more formed opinion of how Summer, and the others in the story, work within the world. Issue 1 saw Summer’s bar and grill being the center of all the action. Issue 2 brings everything into focus, and we learn that Summer is the sun of this story’s galaxy. All of the other characters are just the planets in her gravitational pull.

It is nice seeing a noir troupe being turn on its head. Letting the femme fatale not just be a side fixture in the story, but being the main character. It’s refreshing, and shows that Chum isn’t just running through the motions when it comes to this surf-noir mini-series. 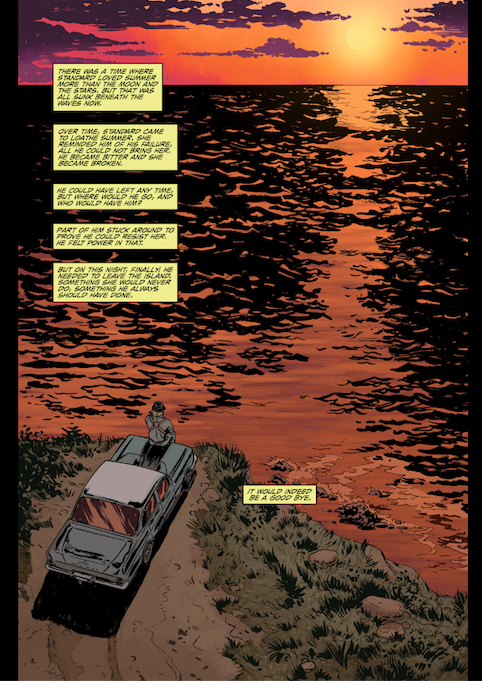 The art is nothing new, Kivela continues to amaze with another great issue of panel perfection, along with Mark Dale on colors. These two are a well oiled machine. The “magic hour” is not just for movies anymore. They parlay a beautiful story setting into jaw dropping ocean scenes that will have you scrambling to book a beach vacation.

The only thing I’m worried about is if Chum will be able to stick the landing with only one issue left. We shall see.

Issue 3 is on the horizon, and I’ll be looking forward to seeing how this bloody mess will be wrapped up. For the ones that haven’t haven’t dipped your toes into the cool bloody waters of Chum, go back and grab issue 1. It’s worth the risk of a shark attack.