Godzilla Oblivion #5 marks the exciting finale of IDW Publishing’s five-part comic series, written by Joshua Hale Fialkov and featuring art by Brian Churilla. On an Earth that has never known monster, the situation is now critical, with Godzilla on the rampage and waves of behemoth Kaiju crossing the portal from the parallel Earth in the alternative dimension, it seems the scientists and the military have condemned their world to destruction. Get set for Godzilla’s greatest battle and the biggest monster smack down of all time!

Luring Godzilla from the monster ravaged parallel Earth to their own world to defeat King Ghidorah for them has backfired spectacularly for the military and the scientists. When a nuclear weapon killed King Ghidorah, not even an army of Mechagodzillas could end Godzilla’s rampage. Now, this Godzilla epic by Joshua Hale Fialkov and Brian Churilla takes its bizarre What If? premise to a whole other level, because without Godzilla’s help to keep their monsters in check back on the alternative Earth, their monsters grew increasingly more powerful and dangerous. It left the people of that apocalyptic world with only one choice - to use the portal and send their monsters to the parallel Earth. It sure looks like the scientist and the military of this world are regretting their quest explore alternative dimensions now; as they face the terrifying consequences of what their experiments with the portal machinery has wrought upon their planet.

Joshua Hale Fialkov skillfully keeps the momentum and drama building over the course of this issue. Godzilla’s mammoth battle against this horde of monsters that have emerged from the portal will soon devastate the entire world. The military are ready to deploy a final nuclear solution, even if it destroys everything, but the scientists still have the reanimated Mecha King Ghidorah at their command, but will it give them enough time for them to implement a solution to the crisis, or will the monsters now overrun this Earth as well? 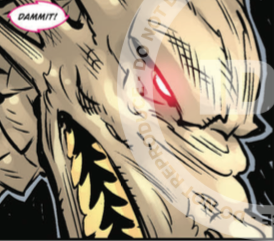 Brian Churilla certainly goes all out to deliver some pretty impressive artwork for this final issue of Godzilla Oblivion. The monster action is fittingly epic in scope and scale, with Godzilla tearing it up against legions of his deadliest adversaries, and we are treated to some of Churilla’s finest work on the series to date. The combined roles of the scientists and the military cast of character is brought into sharper focus as all the city leveling monster action unfolds around them, there is some great characterization, and several moments of selfless bravery interspaced with the conflict between Godzilla and his lumbering combatants. The colors by Jay Fotos are also exceptionally good, vivid shades and tones accentuate virtually every scene, and there are some truly spectacular and surprisingly emotional moments that round off this series in fine style.

The issue races towards a never jangling finale, with Godzilla closing in, key technologies are frantically reprogrammed, fateful decisions and sacrifices will be made, and everything rests with one last hope for humanity.

I’ve thoroughly enjoyed Godzilla Oblivion. Its provided a refreshingly different take on the Godzilla franchise, with its innovative and exciting storyline by Joshua Hale Fialkov, impressive art by Brian Churilla, and colors by Jay Fotos, this mini-series has thrown in several game-changing plot twists along the way to keep the momentum going, and now Godzilla Oblivion #5 brings the series to a thrilling conclusion!