The Rocketeer At War #4 hits all of the mainstays in a Rocketeer joint, but does it hit the target in actuality?

The Rocketeer At War #4 starts off with Cliff Secord, his best gal Betty, and British agent Roxy Hart at Castle Kriegstein just after “The Kaptain” has taken off in his super-weapon, “The Amerika Bomber”, towards New York City. 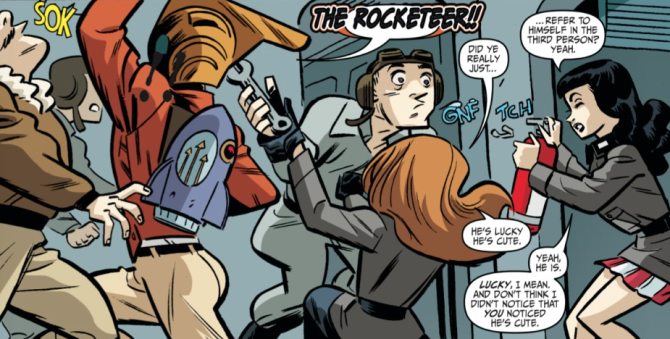 Cliff, along with Betty and Roxy, take off with the help of Cliff’s jet-pack to catch The Kaptain before he can unleash the weapon on NYC.

They catch up with the bomber, infiltrate it, and the battle between the allied trio, and the Nazi crew begins. Will they save New York City? Only God, and maybe The Shadow, knows.

What we get in this issue is a definitive ending to the four part arc. What we don’t get is something that will play well for everybody. 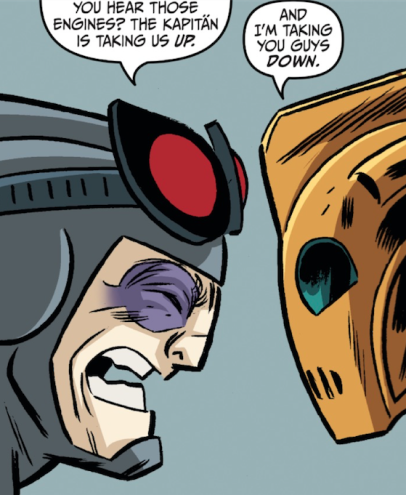 The art by J Bone isn’t my favorite, but that is just my personal taste. It is a Kim Possible style that may be a little polarizing. Not to say that is bad, it just doesn’t suit my personal preference when it comes to WW2 Nazi comics.

With that said, Bone does some interesting things with the layouts that make the book fun to look at.

The colors add a lot, too. Pattison’s use of a vibrant pallet with darkened tones gave this the slight punch-up in the edge department it needed to balance out the overly Archie-ish feel to the book.

The writing, by Guggenheim, works overall, but comes off a bit flat. The dialogue is quip-heavy, even for the likes of a Cliff Secord. It comes off a little too much on the nose as a throwback to hokey, kiddie, no real stakes, comics of old.  This is confusing, because of the rampant use of damn and hell. It left me wondering who this book was aimed at.

Overall, it was a book that was worth reading, but had a few flaws that I couldn’t get past.

If you like the Rocketeer, I can’t say this is an automatic read, but for a younger audience it may be something to check out.