A 50th issue of a comic series run is a milestone in the comic biz. As a comic reader we don’t just expect an average issue; we expect something big and in your face. And with Star Trek 50 we get exactly that. Khaaaaaaaaaaaan! Need I say more?

Well, we kind of get Kirk’s arch-nemesis. Keep reading, all will be explained.

We start our adventure with the USS Enterprise and company having just left a port. All is good; ship systems running at optimal levels, crew moral is high, and space is calm. Suddenly, the Enterprise finds itself in an ion storm. After the storm subsides the Enterprise and crew find themselves hundreds of light years off course in the Ceti Alpha System.

Ceti Alpha V, which they are closest to, is a known uninhabited planet, yet they are hailed by someone from the planet. A group of scared people reveal that they have been told that the Enterprise had been sent to destroy them for not paying tax to the Emperor. They beg the Enterprise not to harm them and to fully understand why these inhabitants are scared of them specifically they send an away team to surface. 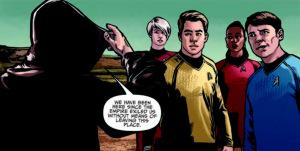 On their arrival, the away team, including Kirk, is met by the people from the planet. They claim they are peaceful, and the cloaked figure that seems to be their leader says he has made a vow of peace. As he removes his head cover Kirk and the crew instantly have phasers on him. And when I say him I’m talking about Khan…kind of.

Everything is flipped on its head, as we discover that things are not as they seem. Who, when, and where we find ourselves, and the crew of the Enterprise, are up in the air.

This issue is just what Star Trek fans are looking for when they pick up a Star Trek comic, and the stakes are as high as they have ever been. All around this is great. I’m hooked.

Mike Johnson does an amazing job with the story. It feels like an old school Star Trek story with the modern feel from the Star Trek movie character likenesses penciled by Tony Shasteen. Shasteen has just the right amount of recognizability of the characters with a toned down cartoony feel. This is helped by the rich simple tones of the colors by Mastrolonardo. It feels like a modern version of Star Trek the Animated Series. Its comfort food packaged in a comic book. With the news of a new Star Trek TV show coming to CBS, Star Trek is in a very exciting place right now. Issue 50 hits the spot, and I can’t wait to see where this story will go. Pick it up.

Jonathan Winchester is a writer from Dallas, TX where he lives with his wife Maddie and their annoying cat. He believes Han was the lone shooter, that nothing looks better than a silver age comic in Mylar, and that there is no better feeling than walking into a dimly lit movie theater. Twitter- @TexasWingnut