Welcome back Longboxers! A return today, to those back issues that dwell within cardboard prisons, all too often forgotten amidst the constant influx of new material. This week we take a look at the Image Comics Cliffhanger book Battle Chasers #1.

I suppose it’s cheating a little, because this book wasn’t at all lost. I was given this issue within the last year by a friend when we were talking about how much we loved the Cliffhanger books of the late 90’s. When I began going to cons it was my mission to find this despairingly short run, only 9 issues, which ended in 2001, the year it moved from Wildstorm to Image.

Battle Chasers actually follows several storylines, with each of the main characters occupying parts of the story. But we’re talking issue one. Let me rein it in. Issue one begins with Gully, a small girl, on the run from a pack of weapon-wielding werewolves. She’s saved by a giant robot (wargolem) called Calibretto, who is owned by a wizard named Knolan. The wolves were looking for Gully’s father’s gauntlets, a pair of magic gloves. Elsewhere, a warrior, drunk, named Garrison is recruited by the ….um…top heavy?…Red Monika to break a man out of a prison called Skyhold.

The art really catches me and holds me in that late 90’s feel. It’s a mix of manga and western styles, and when you look at the other Cliffhanger titles, J. Scott Campbell’s Danger Girl and Humberto Ramos’ Crimson, you see that they are similar. Heavy line and bright colors. The just-short-of-caricature emphasis on hands and noses, enlarged feet…written out it doesn’t seem like it should work. But visually, it’s constantly stunning. 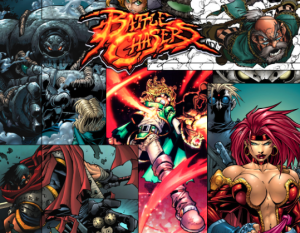 It’s exciting. It’s fun. It’s sexy. It’s everything you wanted out of a comic in the 90’s. This was a time when the Image folks had split off and exploded in popularity. All of these small company’s were producing. And the staff? Dynamite. Every great artist thought they could do what Todd McFarlane, Erik Larson, and Jim Lee had. It was a good time to be a creator with a good idea.

That all imploded with the market, but what you see in Battle Chasers is what you came to expect from small comic companies. For me, that’s what I still expect from small companies. It’s a commitment to telling the story they want to tell in the way they want to tell it. The Image success was also about getting paid credit for that talent, but it was story as well. Would DC or Marvel ever have sanctioned a book like Spawn? Not in the way it was made by McFarlane. And Battle Chasers is a book that feels at home away from those bigger companies, and thrives because of it.

Joe Madureira writes his story. What to put in a giant robot? Sure. How about a pair of magic gloves. Done. A ridiculously large-breasted badass heroine? Of course. But Madureira wraps all of those seemingly disconnected things into a tapestry of awesome. His storytelling is great, and in just one issue you get the crux of each of the characters, weather it be a redemptive (Garrison and Knolan) or just the love of adventure and money. (Monika) 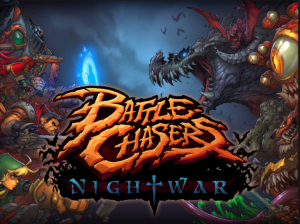 Fear not, oh you lovers of such things. Madureira recently closed a Kickstarter project with his company, Airship Syndicate, to a fully-funded RPG game based on the comic series called Battle Chasers: Nightwar. If ever you wondered about the popularity of Battle Chasers, listen to this. Over 14,000 people pledged over 800 K to fund the project. That’s based on a comic book that ran for 9 issues over a period of 3 years with 3 different publishing companies almost two decades ago. If you have a moment, pick up Battle Chasers. You won’t be disappointed.

Brad Gischia is a writer and artist living in the frozen Upper Peninsula of Michigan. He is married and has three kids and a dog, all who put up with his incessant prattling about comic books. Twitter - [email protected] https://wordbloonillustration.wordpress.com/