Adapted from the novel by: Richard Matheson

I did a review of The Shrinking Man #1 that ended with me saying how they had me for the duration. That was a true statement, and I’ve been following along for the 4 issues of this adaptation. It turns out that this story had even more legs than I originally suspected. The overall miniseries is a great read, and yet I suspect that not unlike the shrinking man, there is more here than what meets the eye. I am planning on grabbing up the novel this was adapted from. In the supplemental materials, they allude to how much deeper the novel goes, and what lush language Matheson uses to evoke the strange world of the shrinking man. 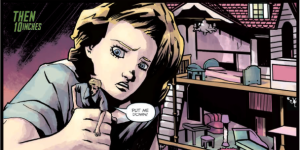 But enough about how much this made me want to read the novel. The comic is what is under review right now. I stand by my original observation that the two time periods feature two versions of the main character, Scott. In his larger body, he is still able to interact with the world in more or less a human way, he can talk to his wife about his concerns, and try and live a life as normal as he can make it given his size at the moment. The other guy, the one who is too little for that, is a tough as nails loner in survival mode. His concerns about being intimate with his wife, working, holding his child, being a normal man, are all behind him. He is a man in a strange wilderness, with his only concerns being the spider that he shares the cellar with, and finding food and water. 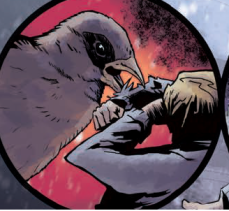 The narrative bounces around, but basically follows those two tracks in a linear fashion (brilliantly denoted by his size on that day), big guy becoming littler, and very little guy trying to survive while ultimately heading for the point that he fears he will disappear. As the concerns of the big guy are shed one after another, and he is forced to deal more and more with elements of survival, the narrative of him as a fraction of an inch heat up to a fight to the death with the spider that plagues him. The final mystery of what happens on his last day are revealed, and in a pleasing way. The man who clung to hope in the face of unbeatable odds finds new hope in the final chapter, and in a surprising way. 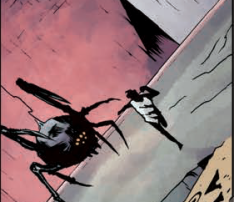 The ending felt slightly rushed, as I wished that they would have more space to play it out for us. At the same time, the afterword tells us that so much was left out of the novel, or else glossed over in some way or another to make it work better for the comic. I think they did what they could, and as faithfully as possible with the 4 issues they had with which to work. They state in the end text piece that the movie from the 50’s was an imperfect translation, and left a lot on the page of the novel. I think the same could be said for this comic, just based on what they say in the text piece. I think this comic turned out great, is a fulfilling read, and at the same time a teaser for what is probably an even meatier read in the novel.

BJ DuVall is a novice comic creator, and nerd. He likes to spout opinions, whether people like to listen or not. Usually not. http://www.bjduvall.com