Small press publishers have a great ability to be able to find small stories, ones that might fall through the cracks at a larger publisher, ones that may not see the light of day when they have to compete with caped heroes and dark zombie dramas.

Alterna Press has one of those books in All My Ghosts, written and drawn by Jeremy Massie and art by Jason Rainey. It’s a fairly simple story, fairly common in the days of downsizing and merging and the closed doors on small businesses.

Joe Hale is sole proprietor of his family’s business, a small town newspaper. He runs the paper, edits it, and is the head of a small, close-knit group of employees. But Joe has lost the joy he once had in running the paper. The constant search for headlines, ad sales, and the elusive editorials have taken their toll, and Joe can no longer see any happiness in the newspaper business. Joe’s mid-life crisis is born with the introduction of a ghost, and the offer to buy the paper from a multi-city corporation. Joe accepts the offer, and that decision marks a change. First Joe tries to recapture his past, and in those moments of hard partying and a one-night stand, he finds that the ropes that bound him to his past have dried and crumbled. He no longer feels the weight of other’s lives on his own. He is divorced. His daughter is on the cusp of going to college. With the sale of the paper he’s no longer responsible for the salaries of his employees and the happiness of their families. It’s liberating, and in that liberation he finds the creativity that he feels he’s lost. He begins writing again, but this time it’s without worry. 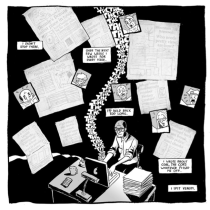 With such an action come repercussions. The paper goes into a business spiral. Joe’s best friend, Billy, goes along with him for one wild night and then quickly finds that he’s passed this point in his life.

The crux of the book rest on the question of “who are the ghosts?” Are they actual spirits, roaming the halls of Wise Press at night, knocking things off of shelves and scaring the paperboy out of the bathroom? If so, are they the lost souls of Joe’s dad and grand fathers, who look down disapprovingly on the decisions of their ancestor? Or are the ghosts the people that haunt Joe’s daily life? This seems like the more likely idea to me. The people that drag Joe and hold him to the life that he’s lived at the paper for his entire life haunt him? Billy and Anna and Big Cindy Mullins are the ghosts of the life that he’s dug himself into. This is the story of getting out from under their collective spirit, as well as reconciling himself to the fact that Joe is not the man he thought his father wanted him to be. 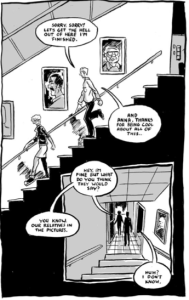 Jeremy Massie and Jason Rainey paired up for the artwork, and it’s thoroughly engaging throughout the story. From the character design to the style, from the framing of panels to the “sloppy” (Not straight-edged) borders and the square formatted pages, everything works to gel into a visually pleasing book.

As I read through All My Ghosts I was expecting a twist ending. The story seems tailor-made for it, and perhaps some of that intuitive reasoning comes from too many Twilight Zone marathons, but I was waiting to see Joe’s destructive behavior come back on him in the end. I won’t spoil it, but the end was surprisingly positive and wholly refreshing.

All My Ghosts is one more of those great stories that might not have been seen by a wider audience if not for Alterna Comics. Hats off to a wonderfully crafted coming-of-mid-life-crisis tale, and a heart-felt portrait of a quickly dying medium. There is love in this story, put there by Massie and Rainey, who haunt the pages with their style just as Joe’s father haunts Wise Press. (Or does he?)