For fans of the Ghostbusters franchise, we’re coming up on a golden age. Not since 1984 have we felt so jubilant, so excited. There’s more on the horizon.

It’s simply this. Weather you agree with the “all girl” take on the classic team or not, the endurance of popular characters comes when they are re-made again and again. Would Batman still be popular if not for the Frank Miller upheaval of the 80’s? It caused a rift between the classic fans and the dark fans, a rift that healed to make the whole franchise stronger. I suspect the same will happen with the Ghostbusters. Until 2016 and the inevitable blockbuster, we have a great storyline to tap into, Erik Burnham’s Ghostbuster ongoing at IDW.

Burnham began with the series during IDW’s crossover event Infestation in 2009. In 2010 he launched the standalone, and it’s been going strong ever since. And with good reason. Burnham is a fan of not only the original series, but of the entire era. He takes the 80’s and sprinkles them throughout, liberally dropping in callbacks to the original films and tangential works as well. 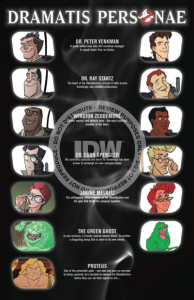 With the latest series Burnham crosses the streams in a way that may previously have been thought impossible. In Ghostbusters Get Real we see the original team from his series and the team from…wait for it…The Real Ghostbusters cartoon series, which ran from 1986 to 1991. As he has done in the past, this series relies heavily on both worlds, to which Burnham seems to have encyclopedic knowledge. For the sake of clarity, from this point on I’ll refer to one team as TRGB (The Real Ghostbusters) denoting the cartoon, and the other as BGB (Burham’s Ghostbusters). The Venkman’s are the same, yet slightly different, as their different dimensions would suggest. It’s so fun to watch Burnham play them off of each other, the Rays are both highly excitable, the Egon’s (despite their hair) both are constantly working out the angles, but you see that TRGB Egon is a little surprised at the seriousness of the BGB Egon, asking why he would ever find the need to invent a grenade. “Sometimes you just need a grenade.” 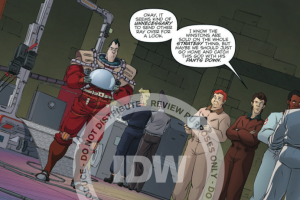 The Dan Schoening’s art is so great.  It’s to the Ghostbusters style just as Burnham’s is to the story.  From his panel layout to the character design it’s some of my favorite on the market right now. His recreations of the TRGB’s are spot-on. One thing I always go back to in Schoening’s art is the way he angles the images in a panel. It’s amazing to see how much he can fit into an off-kilter frame, and how fantastically he uses the space provided with perspective changes.

Luis Antonio Delgado’s colors are the other tie on this tightly shipped package. To change between the BGB universe and TRGB universe he uses shading and subtle changes in the coloring. TRGB keep that cartoon feeling, brighter colors and lighter textures, while BGB have a grittier edge.

And I haven’t even talked about this issue yet.

Issue #3 is on stands today, and it’s another reason to go back and pick up the others if you haven’t already. The demi-god Proteus is on the trail of TRGB in an attempt to catch them before they catch and imprison him. They’ve skipped dimensions and are just finding out what is in store for them if Proteus finds them. On their trail is a three-headed hound, which is skipping through dimensions and finding alternate Ghostbusting teams. (This is a fantastic sequence, with some truly great little throwbacks and custom GB teams. Well done Burnham and Schoening.)

This series is one of my favorites. One that you will pick up for nostalgia and keep on your pull because of the fantastic writing and wonderful art.

Ghostbusters Get Real #3 is full of funny little quips, nods, and shakes to the original series, and joins two things that I’d never thought possible to join together, the original series and the cartoon.   In the end it seems to me like Burnham could be easily writing canon, and if that’s so, it’s a proton cannon I’m glad to be atop of.