Review: This may be the most powerful volume to date. Taking center stage is Punpun’s Mother, who has not been much of a driving force for the story. Generally staying in the background, only coming to the forefront when it feels like Inio wants to reminds us about the strained relationship between her and Punpun.

All that excellent foreshadowing comes to a head this volume as Punpun and his mother face separate dilemmas that strain their relationships even more. Punpun, who’s going on his first date, simply wants it to go perfectly. And his mother, who is dealing with serious health issues, goes on an emotional journey that allows her to finally come to terms with who she is as a person.

Unfortunately, after her epiphany, there is yet another 2 year time skip at the end of the volume so we don’t get to see exactly what her growth was like if any. Although if the final chapter in this volume is anything to go by, the hints in her character, she still was unable to bring herself to be a better person.

However, the emotional journey this chapter was spot on and incredibly well paced. Seeing these two characters attempt to live their separate lives yet tethered by familial ties was rather poignant. They don’t love each other, and while neither of them can say it to their faces, they both also know it to be true of the other.

Up to now I’ve felt pretty much all the women of this series were rather unlikable. But to be honest, they’re just human. Aiko started out as a precious little girl but grew into a selfish brat. Midori was in a deep depression due to Yuuichi’s actions at the time she stole Punpun’s virginity, but only because she was looking for the slightest comfort to make her feel better at the time. And as we learn from Punpun’s Mother this volume, she too was never a bad person, just allowed herself to become so badly molded by the environments she grew up. It only took yet another near death experience (she had two earlier in the series) to finally come to terms with herself.

Thankfully, unlike the last time this happened – which was exactly 2 volume ago by the way, seeing a pattern here – the 2 year time skip actually does feel right. The only stories that don’t feel finished are Yuuichi’s, as his seemed to be rather dropped. All we know of him is that he returned to Midori off screen and then we don’t see him at all for the rest of the volume, well except for one panel in the final chapter. And the Seki/Shimizu storyline, which I’m really curious to see where it’s going considering they’re getting so much screen time. They did as well during Punpun’s middle school days, so I don’t think we’re done with them by a long shot. What are you planning with these two Inio?

But again, the 2 years doesn’t sound out of place or rushed this time around. Probably because so much actually got to happen even though there’s really like only two major storylines running parallel this volume.

The Punpun now is also very different than the Punpun we started this series with, as he continues to grow more cynical about his situation in life. Knowing that he’s young and there’s nothing he can do to fix it has set him to be an adult with the same attitude. And it’s going to be really sad if adult Punpun is like that. During his first date, of course it goes down hill south when he reveals he’s on the date rather than making sure his mom gets through her surgery okay. 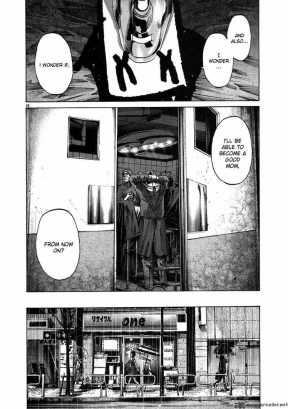 What follows though was the most poignant situation in the volume, as Punpun attempts to rape his date in frustration. It’s an incredible scene where we finally get to see the darker turn Punpun is beginning to take in life. He immediately regrets his actions, but I was taken so off guard by it I wasn’t for sure how to feel about it. But that’s the beauty of Inio’s writing at its height.

The ending of the volume however made me cry, as the story of Punpun’s mother comes to an end quite literally. And even in the end her and Punpun’s relationship was never able to recover. I feel his mother’s story is representative of the most human story yet in this series. Because normal things transpire around her, and yet for all the hardships she goes through, she never quite catches that break and in the end cancer swoops in to finish the job.

It was such a sad scene… and I can only imagine how more depressing this series will get as it continues along. Inio better have a happy ending for this series, or I’m gonna be really mad. Finishing this volume reaches the halfway point for me in this series.

Final Score: 5 Regrets in Life out of 5